Russ Dobbs said:
I, for one, know where I'll be next year (if Covid stops playing around like an insane Bulldog on the lose)!

My 5.1-->2.0 downmix of Dance of Death was my go-to version for a long time. Now it's neck-and-neck with the vinyl reissue from a couple years ago. I didn't mess with it, just used Handbrake's default algorithm to rip the DVD-Audio, as I recall. Sounds good, but it literally is a remix -- sounds quite different than the original at times -- and overcomes to some extent the muddiness of the Caveman stereo mix.

Wait, is that for real? Priest, Maiden, Metallica, Mercyful Fate and Opeth? That is a MONSTROUS lineup.
Last edited: Jul 21, 2021

What does senjutsu mean?​

The meaning of senjutsu may be familiar to those who have studied Japanese martial arts – jujitsu, or jiu-jitsu, being popular in the UK, US and elsewhere. Judo and mixed martial arts are derivatives of techniques borrowed from jujitsu.

Jutsu literally translates to “skills” or “techniques”. Traditionally, these are the “arts” a ninja employs in battle. Alternative translations of jutsu include “method”, “spell” and “trick”.

It can be paired with numerous prefixes, including “ju-” as above, but also “ba-” (bajutsu is a form of military equestrianism, or horse riding) and “kyu-” (kyujutsu is the art of archery).

The many meanings of senjutsu​

Iron Maiden’s press release defines senjutsu loosely as “tactics and strategy”. Senjutsu is also a theme of the Manga series Naruto, which holds that its literal meaning is “sage techniques” – in the series, it is a field of jutsu that involves only the use of natural energy.

WordHippo, meanwhile, translates “sen” as “war”. And, corroborating this, in a subreddit about the meaning of senjutsu, one user claims its meaning is simply “Art of War”.

Some words, terms and phrases don’t translate directly into other languages. Senjutsu – whether its meaning is “sage techniques”, “art of war”, “tactics and strategy” or something like “the method of using natural energies to defeat your opponent” – is one of those. Where and when can you pre-order Iron Maiden’s new 2021 album Senjutsu, and also, what is the meaning of the word senjutsu? Is it to do with Samurai Eddie?

Things are available for pre-order on Amazon now. https://www.amazon.com/s?k=iron+maiden+senjutsu&ref=nb_sb_noss The deluxe box set says unavailable. I hope that just means it hasn't been put up to order yet.

Travis The Dragon said:
Things are available for pre-order on Amazon now. https://www.amazon.com/s?k=iron+maiden+senjutsu&ref=nb_sb_noss The deluxe box set says unavailable. I hope that just means it hasn't been put up to order yet.
Click to expand...

Yeah. Just preordered the LPs & the cds. I’m going to got wait by my mailbox now.

I’m waiting for the FC boxset to go on sale so i can snatch it up.

chaosapiant said:
I’m waiting for the FC boxset to go on sale so i can snatch it up.
Click to expand...

A FC only boxset?

Travis The Dragon said:
A FC only boxset?
Click to expand...

It's supposedly like the super deluxe but with a wooden box- only available to FC members.

Travis The Dragon said:
A FC only boxset?
Click to expand...

Basically a pimped out version of the standard super deluxe box set elsewhere. 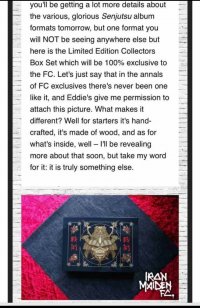 A priest would say listening to Maiden is bad.

That's about 30 quid too dear.

I was expecting the cost of the vinyls to be about €75 or thereabouts for all 3 looks like that was about €100 off.

Box set is €100 on emp as well, which is again over priced for a CD and a video and some fluff. I was expecting about €75

Price for the box version is mental. Assuming the FC one will be worse. Think I'll just get the book CD as that should be reasonable.

PhantomOfTheOpera said:
So have to you already prepared and decided what version(s) you're going to order?
Click to expand...

For sure I will buy the Deluxe Book Version - I have to finish the collection (and because it looks great)... I wish every CD album of Maiden was released in this book version.

Black Bart said:
Just a thought : a 5+ minute song CAN be a fast rocker.
Click to expand...

Some new tshirts up on EMP, album cover one looks good but there's a few shit Eddies as well

srfc said:
Some new tshirts up on EMP, album cover one looks good but there's a few shit Eddies as well
Click to expand...