Green Is The Colour is a Roger Waters song, originally performed on the ‘More’ album. The audio for this clip comes from a performance recorded for BBC Radio on 12 May 1969, while the band footage was shot for French TV programme ‘Pop Deux’ at the ‘Festival de St. Tropez’ in the South of France on the 8th of August, 1970.

Childhood's End, from Pink Floyd's seventh album Obscured By Clouds, has been remixed from the original master tapes in 2016 by Andy Jackson and Damon Iddins.

In February 1972, the band were already playing The Dark Side Of The Moon live and starting to record its songs, but production was briefly halted when they accepted their second commission for filmmaker Barbet Schroeder, to create the soundtrack for his feature film La Vallée.

In the last week of February 1972, Pink Floyd started work, at Strawberry Studios in Herouville, France, and as David Gilmour later described: “We sat in a room, wrote, recorded, like a production line.” The result was 10 pieces of music: six songs and four instrumentals, which Melody Maker described as “some of the most aggressive instrumentals the Floyd have recorded.”

David Gilmour’s Childhood's End was one of the few songs from the soundtrack to be included in Pink Floyd's live shows and was featured on European dates, starting on December 1, 1972, and at the start of the band's March 1973 tour of North America, usually with an extended instrumental passage.

Grantchester Meadows is a Roger Waters song, originally performed solo on the ‘Ummagumma’ album, that celebrates the English countryside, as in other compositions such as ‘Time’. This special group performance, taped for the BBC, with acoustic guitars and vocals from Roger Waters and David Gilmour, plus additional piano from Richard Wright and taped songbirds, successfully evokes a summer’s day in Grantchester, a small village close to Cambridge, England. Grantchester’s famous former residents include the Edwardian poet Rupert Brooke, who moved there and subsequently wrote a poem of homesickness entitled ‘The Old Vicarage, Grantchester’. Taken from ‘The Early Years 1965 – 1972’.

Mosh said:
That's awesome, that'll be a really memorable show. I wonder if he'll bring out any of the old Floyd stuff? Echoes seems most likely but could you imagine him busting out A Saucerful Of Secrets?

It seems that Gilmour's recent solo shows are at least half Pink Floyd material, at least some of it from the early days.

I dig his solo material from the early 80s - "Murder" in particular was a great song. Think this clip was from the tour for About Face -- which would make that Mick Ralphs with the first guitar lead and Mickey Feat with some tasty bass lines.


Oh, and last weekend I learned that my dog likes Pink Floyd too:

Roger Waters has announced the title and release date of his long awaited new solo album after 25 years after his last rock album, Amused to Death. Is This The Life We Really Want? will be released on the 19th of May.

Here's the latest teaser from the album:

I can't believe after years and years of speculating and alluding to a new album, Roger is actually releasing it. And from that teaser, it's sounding absolutely incredible. I just hope it isn't convoluted with line and lines of lyrics, and that his vocals are better than they were a few years ago.

But I can't wait to hear this album, and I'm eagerly awaiting some UK tour dates!

Staff member
An exhibition marking 50 years of Pink Floyd is opening at the Victoria and Albert Museum, London, this weekend.
http://www.radiox.co.uk/artists/pin...ibition-immortal-remains/#l2DszlpYY1t62sqk.97

I might have to make time to visit this around the big Maiden weekend. 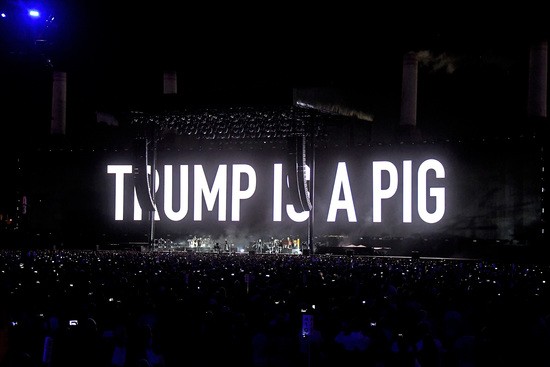 Back in October, Waters unveiled his feelings about Trump

Pink Floyd’s Roger Waters is kicking off his 2017 U.S. tour this month, beginning with a powerful reminder that this is the guy who wrote The Wall.

Roger Waters is sending a very clear message to Donald Trump as part of his new Us + Them world tour. The message is "Fuck Trump". 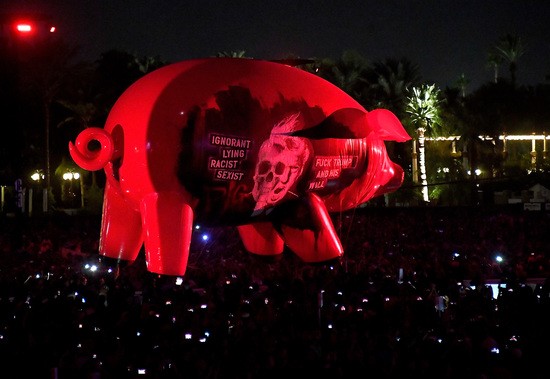 Waters had the Trump pig made before the November election

Waters also floats an enormous inflatable pig over the audience with Trump’s face emblazoned on it. Facebook’s Union Thugs pointed out that the opening show for some reason had some Kansas City attendees seemingly surprised by Waters’ political assertiveness. 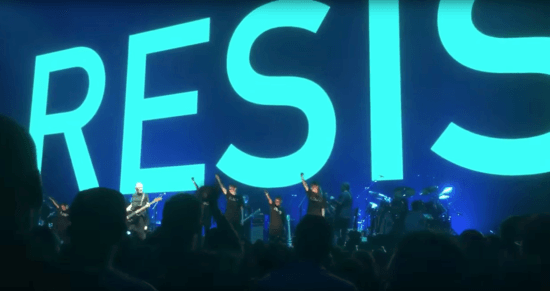 Throughout the concert, Waters posted various messages on the hundreds of square footage of video screens attacking Trump, the human violations in Syria, war in general, racism, as well. The “fans” who didn’t like the anti-Trump message must have been super bummed out to see children on stage, sporting “Resist” t-shirts during Waters’ rendition of “Another Brick in the Wall.” I mean, the guy wrote The Wall for Christ sakes. What did you think that was about?

You can watch the soundcheck and the show below, if you have a few hours. It’s a pretty impressive production but I guess some people were hoping he would just play “See Emily Play” and “Bike” for two hours.
Roger Waters, just five days away from embarking on his massive North American Us + Them concert tour, staged a production rehearsal concert at the Meadowlands Arena located at the Meadowlands Sports Complex in East Rutherford, New Jersey. This venue, formerly known as the Brendan Byrne Arena, Continental Airlines Arena, and Izod Center, has capacity for around 19,000. This concert was performed in front of a smaller audience of some 1,000 invited guests and radio station contest winners. Back in September 2010, Roger staged a similar rehearsal concert prior to the start of his massive 4-year worldwide Wall concert tour – and it took place inside this same venue.

I love it. From me, at least one of mankind may attack him this massively and bluntly.

He attacked George W Bush during Leavng Beirut on his 2007/8 tour, and advocated voting for Obama through confetti on the same tour.

So I don't know why this is such a big shock. If you're going to see Roger Waters and not expecting to see some kind of political commentary, you're a bit dense.

Forostar said:
I love it. From me, at least one of mankind may attack him this massively and bluntly.
Click to expand...

"Bluntly" is correct. Too bad Waters can't make political statements with a little more cleverness, and maybe a unique insight or two. But he seems to rely on his celebrity stature to give his political pronouncements weight, rather than his creativity. Oh far out, Mr. Waters, Trump's a pig. Just like in the song, man. Wow, that's mind-blowing; you think of that comparison all by yourself?

And it's not as though drawing pictures depicting politicians in bondage gear, or in ugly states of nakedness, or otherwise unflatteringly, is any more original; that tradition goes back centuries. I haven't seen the pictures in question, and maybe they're done in a truly original style that overcomes the hackneyed idea, but I doubt it.

Staff member
Roger Waters isn't really the type I want on my side.

But obviously he was going to have anti-Trump stuff in his show. Not sure how that was a surprise to anyone.

Most criticism in the show consists of quotes made by Trump himself. Very clever and creative indeed.

Well Trimp himself is all about bluntness and no subtlety, so this seems appropriot.

Also, Trump is like an archetypical "pig" (from the song)

Funnily enough, Pigs (Three Different Ones) has come to mind before when I've seen Trump on TV.

From 7:30 you can hear the heaviest Pink Floyd ever.

Certainly (one of) the best.

That's from Oakland soundboard bootleg that surfaced just a couple years ago. Find it via that "HD SUP" keywords on YT.

My favourite bootleg from that tour has to be from Montreal, it has the most intense version of Pigs I've ever heard, which climaxed with the infamous "spitting incident".

Zare said:
From 7:30 you can hear the heaviest Pink Floyd ever.
Click to expand...

David Gilmour may be my favorite guitar player, ever.

Staff member
Listened to the new Roger Waters album. If you're OK with an hour of Floyd rehashes, it's pretty good. I did like a lot of the music but the constant Floydisms quickly bordered on parody. As far as lyrics go, Waters is definitely not what he used to be. Many of the lyrics are shallow and tread old ground without adding anything particularly substantial.

Once you get over these (admittedly massive) hurdles, there's a lot to enjoy here. Roger Waters is still capable of putting together a coherent cinematic full album experience. While the Floyd callbacks are a little silly at times, most of this album feels like a musical sequel to Animals, which is my favorite Floyd album. Obviously the songs are shorter so the vibe does feel different. I would recommend this to anyone who really likes Floyd/Waters and is craving new music in that style, but can stomach the rehashing of old ideas.