Just started reading True Grit and I'm liking the way that it's got a lot of character. I don't know if I described that well, but what I mean is that I'm just three chapters in and the characters that have been introduced so far are very fleshed out. The witty writing and subtle humor is also appreciated amidst the otherwise dramatic western backdrop. I love how Mattie is smart and spunky and way mature for her age. Rooster Cogburn doesn't seem as badass as I thought though. After this, I'll watch the John Wayne film version, then the Coen Brothers adaptation.
Click to expand...

So I finished this tonight and it was really great for the most part. I just thought that the climax was a bit too "crazy." The tone and pacing of the story shifted awkwardly from that point onwards also. I still enjoyed it a lot. I'll watch the John Wayne version tomorrow.

Staff member
Did anyone read this book or its sequel?

No, but it has gotten good reviews. I really think it is strictly for a niche market. You have to like Guillermo Del Toro's work AND vampires... if you do knock yourself out. Personally, I'll wait to hear more about it.

Has anyone here read Moneyball?

Central Premise: The central premise of Moneyball is that the collected wisdom of baseball insiders (including players, managers, coaches, scouts, and the front office) over the past century is subjective and often flawed. Statistics such as stolen bases, runs batted in, and batting average, typically used to gauge players, are relics of a 19th century view of the game and the statistics that were available at the time. The book argues that the Oakland A's' front office took advantage of more empirical gauges of player performance to field a team that could compete successfully against richer competitors in Major League Baseball.
Click to expand...

I was wondering if I would "get it" even if I'm not a big baseball follower.

When I'm done reading The Ego and its Own, I'll start reading Paul Bowles' Too Far From Home. I loved The Sheltering Sky so expectations are high for this one.

I am looking forward to read: 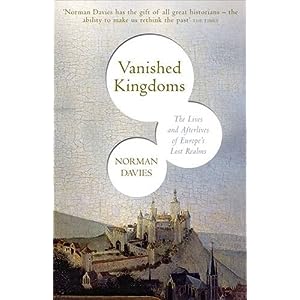 The world we live in today has not actually been in place very long. It was preceded by layer after layer of unceasing political, cultural, social and international change. Even a casual reader of the daily papers has witnessed the map of Europe being radically altered in the space of just a dozen years. If one thinks of the broader sweep of history, one can see in the longer term that all communities, all institutions, and all countries are impermanent. It is this line of thought that "Vanished Kingdoms" aims to explore. In a series of case studies, chosen from different periods and various regions of European history, "Vanished Kingdoms" demonstrates how rigid and inaccurate our mental maps of the past can be. Ranging from the post-Roman Kingdom of Strathclyde, through the medieval civilizations of Aragon and Provence, right up to the evaporation of the Soviet Union, the reader is taken on a tour of lost cities and forgotten worlds. The atmosphere and flavour of each lost community is evoked through its art, writing, monuments and poetry, and each study ends with a return to the present day, instructing the reader on how to visit the area and how to recognise the traces of a supposedly 'vanished' heritage. Impeccably researched and vividly imagined by one of our leading historians, "Vanished Kingdoms" demonstrates, as never before, the striking contrast between the present and the past.

Too Far From Home was good. Weird, vaguely surreal, certainly dark. It doesn't reach The Sheltering Sky by any means, but it's still OK.

Staff member
Finished Lord Of The Flies and it was very good. Tons of symbolism and before reading I watched a clip on youtube that compared Simon to Jesus, Jack to Hitler, Roger to Stalin,Piggy to Einstein and a few others I can't remember. I could definitely see the comparisons. It dragged in places but the story was excellent and I think the situation of the entire novel and how each boy reacted to it in their own way genius.
I think the ending was a bit odd, kind of like a When The Wild Wind Blows type ending. It seemed like Golding had written Piggy's death and didn't know where to go from there.I think the ending could've been a lot better but it doesn't ruin the book for me.

Has anyone here read War and Peace? Thoughts? Is it worth soldiering through that book?

I'm reading "The Call of Cthulhu" by H.P. Lovecraft.

valacirca said:
Has anyone here read War and Peace? Thoughts? Is it worth soldiering through that book?
Click to expand...

I gave that one to my dad for his birthday on Thursday. He kept raving about how much he loved the film, and I couldn't bear him talking about it as a film and not as a book. Not him, the man who has a four-floor library for a home.

Unfortunately, I haven't read it myself, but I really, really want to when I have the time. It is an absolute classic, widely considered the best Russian book of all times, so yes, I would say it is worth it.

Alright! One of the blogs I regularly follow has this challenge to finish the book in 2 months and I couldn't decide whether to commit to it or not. I've already downloaded the 7-hour Sergei Bondarchuk film adaptation (this is the one your dad was raving about, yes? or is it the one starring Audrey Hepburn?) so I guess I'll watch that in congruence with the book.

I'm considering reading Titus Livius' books on the history of Rome. Does anybody have a better idea to gain an understanding of Roman history? Would it be more appropriate to learn from a modern source? Also: does anybody know any good alternate history fiction books? I've already read Philip K. Dick's The Man In The High Castle.

Staff member
I'm a huge fan of Harry Turtledove's alternate history stuff. He's made some spectacular worlds with his mind. His writing is only average, but he understands history, and the ideas are fantastic.

No piece of alternate history, of course, comes close to The Man in the High Castle.

valacirca said:
(this is the one your dad was raving about, yes? or is it the one starring Audrey Hepburn?)
Click to expand...

I assume it is the latter. He said he first saw it in school.


portermoresby said:
I'm considering reading Titus Livius' books on the history of Rome. Does anybody have a better idea to gain an understanding of Roman history? Would it be more appropriate to learn from a modern source?
Click to expand...

For someone just getting into Roman history, I would recommend a modern source. While Livy is one of the most reliable ancient historians, even he does not always separate fact from myth, and his knowledge had limits. Unfortunately, I'm not overly familiar with basic literature on Rome in English, but try to find something that isn't overly obsessed with military or political history, as many of the more accessible books seem to be. Maybe national_acrobat can give you a recommendation.

Perun said:
For someone just getting into Roman history, I would recommend a modern source. While Livy is one of the most reliable ancient historians, even he does not always separate fact from myth, and his knowledge had limits. Unfortunately, I'm not overly familiar with basic literature on Rome in English, but try to find something that isn't overly obsessed with military or political history, as many of the more accessible books seem to be. Maybe national_acrobat can give you a recommendation.
Click to expand...

I would second the recommendation of a modern source, but I'm also not too familiar with any books which cover the whole of ancient Roman history, just rather specific people or periods. One book I can recommend is From the Gracchi to Nero by Scullard, which deals with about 200 years of history including the civil wars at the end of the Republic and the beginning of the emperors - it's the most well known period of Roman history and a good place to start.

Finished reading Hermann Hesse's Steppenwolf. A winner! It gets trippier and trippier, and some readers might judge Hesse's writing as too ornate and poetic (bordering on so-called purple prose at times) but his empassioned, almost obsessive introspection and the surrealistic plot twists sure keep the novel moving. I'm gonna watch the movie Fred Haines made from it in 1974.