Albrecht Dürer always reminds me of the Monty Python where they had Eric Idle dressed up looking exactly like him and they had the little song about him, "Oh Albrecht, Albrecht Dürer..." I can't remember the rest, but that's all I can think of now when I see him! ::
A

La Vie (Life by Pablo Picasso (1881-1973), perhaps the greatest painter in history. This particular picture has always fascinated me, both for the mysterious atmosphere, and the cryptic title. It is from his "blue period". Picasso is known for several "periods" in which his paintings were dominated by particular styles. The paintings of blue period are obviously dominated by blue colour tones. There are also the "pink period" and various others.

Another very famous one from this period: 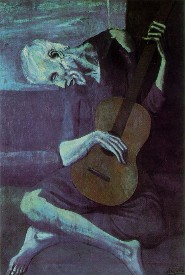 Here is his most famous work, the Guernica.

It's completely pointless to even begin discussing it, because everything has already been said about it. But I wanted to share a little anecdote: In the World Fair 1938 in Paris, the painting was on display, and Picasso himself was presenting it. A German military officer (or maybe an SS man, not sure) looked at it, saw Picasso and asked him: "So, you made the Guernica?", to which Picasso replied: "No. You made it."

Here's three paintings by Vincent Van Gogh, among my favourite

Here's a new sculpture I found interesting. It just went on display in NYC this week.

I saw that on Yahoo! and I decided it's not noteworthy [img src=\"style_emoticons/[#EMO_DIR#]/tongue.gif\" style=\"vertical-align:middle\" emoid=\"

By the way, I was never too fond of Van Gogh. Maybe I just need to get used to his style or get myself some background knowledge to appreciate it (from what I know he was really painting from the depth of his soul), but as for now, I have difficulties with it.

Staff member
Here's one of my all time favorites. Makes me wonder what was going on in Bacon's head...

[attachment deleted by admin]
A

Damn I was gonna do 'The Old Guitarist' by Picasso, but it looks like you beat me too it Perun!  Instead I will say 'The Angelus' by Jean Francios Millet is one of my absolute favourite paintings of all time.  Here's a link: http://www.artchive.com/artchive/m/mill ... jpg.&nbsp; I love the blazing skies and soft tonal colours of the ground and the people, who are painted with such fantasting realism as well...  I won't go into an art lecture about what it means and what Millet is trying to say and all that, but I just think that it's such an honest, humbling scene that is so realistically painted.

The old guitarrist is to me like watching me in a mirror. I feel his sadness, when I see it, I feel that deep emotion that sets my soul free and takes out my deepest weaknesses, putting me in a melancolic mood, and sending me to a small corner in some place with just me and my old guitar.

I'm deeply sorry if I sound corny, but it is just that this painting moves in a way no other painting does.  In the end, I think this is what this painting was meant to make people feel.
There you can see the flower carrier by Diego Rivera, a mexican muralist who was the husband of Frida Kahlo.

I like this particular painting for it representes the life of the mexican indians in many ways.

I can't see it. Is it just my computer ?

No, I could not see it either. To view the picture, I had to quote his message and in the quote I found the address of the image.

There you can see the flower carrier by Diego Rivera, a mexican muralist who was the husband of Frida Kahlo

I like this particular painting for it representes the life of the mexican indians in many ways.
Click to expand...

Ok, here it is

Virgin of the rocks- Leonardo Da Vinci
Mysterious atmosphere, intriguing, controversial, one of my favourite paintings. The angel on the right is stunning, especially the facial expression, so innocent, sort of looking out of the picture. The surrounding, the background gives a kind of mythical side to this masterpiece.

Staff member
There is alot of mystery and speculation surrounding this particular painting. The pointing finger of the angel and the menacing hand gesture of the virgin have been the stuff of many theories, mainly concerning religion.
U

Yeah mainly the menacing hand/claw of the Madonna and Uriel's hand pointing to John the Baptist, as you said. Leonardo probably wanted to play a little trick on the Church, expressing his exceptional appreciation for John the Baptist. Dan Braun used all of this speculation in his novel, of course.

It's not a great piece of art in the sense that it's unique. There have been many portraits made, and on a technical level I don't think this is any better than any other. However, there's just something with his eyes that gets to me. Might be because I'm such a fan, but those eyes seem to know something. There's a sadness to them that intrigues me.


<a href="http://myskitch.com/markusdanielsson/hubble-panorama-20070716-000105/"><img src="http://myskitch.com/markusdanielsson/hubble-panorama-20070716-000105.jpg/preview.jpg" alt="Hubble-Panorama" /></a><br />
Now this is another beast entirely. I've rarely been impressed with space-photos. I think it all looks the same with some light here and a cloud there. But this, which I just found on Digg last week, just gut-punched me. My jaw was on the floor. It's such an amazing vista. And to think that it's real. It's not some computer-animated wizardry, it's not an oil-painting creating amazing light. It's reality, in all its beauty.

There are higher-res versions here (including one that is 200mb, should you need that): http://hubblesite.org/newscenter/archiv ... ge/a/warn/

Max Ernst "The Eye Of Silence" 1943-1944
Frida Kahlo "The Broken Column" 1944
I love the desolate background and the fact she stands so confident with pain weeping from her eyes.

I'm posting links to paintings, rather than the paintings themselves, due to mild nudity which may get some people's (your boss, for instance!) undies in a knot.

One of my favorite painters is Edouard Manet.  I'm firmly convinced that he's unappreciated and overlooked more than he deserves.  Here's a painting that he's very well-known for, although it's not his greatest.  Man had a great eye for composition, and a great brush stroke.

Staff member
I went to see an exhibit on Arcimboldo yesterday at the KHM (Kunsthistorishes Museum Wien), which was great. Arcimboldo was something of a comic genius. The best part about the entire exhibit was how art historians have been trying to trace inspirations for the composite portraits, with the general concensus being that Leonardo da Vinci must have played a role (his grotesque sketches) and Italian culture itself. Why Italian culture? Well, this decoration on a plate displayed at the exhibit, made it all quite clear: http://rhetoricaldevice.com/images/arcimboldo/penisplate.jpg

As for more Arcimboldo: http://images.google.com/images?um=1&hl=en&q=arcimboldo&btnG=Search
A

Natalie said:
I went to see an exhibit on Arcimboldo yesterday at the KHM (Kunsthistorishes Museum Wien)
Click to expand...

I did too, as I was in the area. It's amazing to see how the grotesque can turn into art, and how many subsequent artists took inspiration from Arcimboldo's work. I recommend this exhibition to anyone who's in Vienna, as well as the Bodies exhibition, which is quite impressive... mostly for a biologist like me!
You must log in or register to reply here.
Share:
Facebook Twitter Reddit Pinterest Tumblr WhatsApp Email Share Link
Top