Oh okay, so masking and not HPF:ed tracks is granted the epitet of muddy nowdays too? TBOS isn't guilty of those either, maybe a bit of masking sometimes because they don't like over the top separation but aim for a rather seamless approach. The toms however, are boxy (too much ca 500hz) and should probably have been more tightly tuned with less resonance. It is a professional product that is not to your liking and could do with a couple of minor changes. Don't confuse it with a shitty mix. The loudness war mastering of the CD is a different story, but it's a product of our time and not a fault of Shirley (who isn't the matering engineer)
Last edited: Jul 22, 2021

Perun said:
Same as people complaining about "poor writing" in films or TV series. It's an attempt to sound both smart and objectively correct while not really knowing what you're talking about.
Click to expand...

There will always be a few twats spouting off about things they don’t understand, but this notion that people who complain about a bad mix or bad writing must just be putting up a front is a pretty condescending generalization.

If you can’t hear the different instruments in a recording clearly, the mix sucks. If characters behave in irrational, unbelievable ways, or if events unfold magically just to benefit a story point, then the writing sucks. There are of course exceptions to these on occasion depending on genre or subject matter, but they’re not hard concepts to grasp.

A week later and I love this song. I do need to take a break from it until the album is out though as I'm dangerously close to overplaying it. I guess the first new Maiden song in 6 years can have that kind of impact.

Regarding production, I do think this sounds better than Book of Souls and Final Frontier, and is in line with AMOLAD just louder. The guitars seem more isolated if that makes any sense and you can make out all sorts of licks that felt buried on the last few albums. I imagine this will be even more apparent once we get to the more cinematic, sprawling epic tunes. The only thing that seems weird are the vocals - they are kind of in the mix instead of over top (best I can describe this anyway). Iron Maiden should sound huge, and they do for the most part, but I don't always think this production style does them any favors.

I do think all albums from BNW on have suffered maybe not from muddiness exactly, but they all do kind of sound like a great album is playing with a pillow on top of the speakers. It doesn't prevent me from digging the songs at all, but I do miss having a more polished sound.

But then I'm torn because so much modern rock and metal sounds so pristinely perfect and almost too clinical in approach which I don't care for either.

The problem with that notion is we're treating those as objective facts. They are not. I might hear something clearly in a song that someone else doesn't, which wouldn't be mix related. A show or movie could have a fine plot and someone just either didn't grasp it or wasn't paying attention, and that's not a plot issue. Treating these things as objective facts is not the best way to treat them. People who like different things are not better or worse than other people who like different things.

My favorite part is the short interlude that comes after the first two choruses, where the bass ist going up the octave. It is so classic Maiden yet fresh and fits nicely. And I agree, a noticable stronger separation between the guitars and the bass alone makes it less muddy to my ears.

flat iron said:
My favorite part is the short interlude that comes after the first two choruses, where the bass ist going up the octave.
Click to expand...

It's a nice and unique feature.

''The Writing On The Wall'' single cover in HD:

Edit: I really like the colours that were used for it. 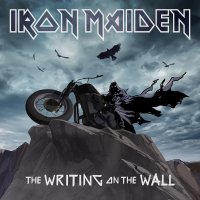 Nature's Beast said:
I thought I heard the lyric "from Hollywood to Birmingham" lol
Click to expand...

There is a typo in the official lyrics post on the YT video, unfortunately. But it's plain as day when you listen to the song.
The start of the 2nd verse Bruce sings "holding on to fury", not jury, which makes a lot more sense.

luv2hike said:
The start of the 2nd verse Bruce sings "holding on to fury", not jury, which makes a lot more sense.
Click to expand...

I agree it's a typo and it's not even because it makes more sense... it's because he clearly says "fury".

The acoustic intro perfectly fits the atmosphere of the whole song.

Maiden really know how to create images with their acoustic intros.

I don't know if anybody else has felt this way, but since the cover art/title were revealed for Senjutsu, I hear The Writing on the Wall in a more eastern vibe now rather than a southern rock style.

Jer said:
If you can’t hear the different instruments in a recording clearly, the mix sucks.
Click to expand...

Ok if you want to sum up whole experience in one Greek dicta. "Son, never trust a lying woman"

In the context though, metal is a saturated form of music. There is little 'air' in the frequency space. Instruments are stacked like canned Christmas meal. In that conditions whether you can recognize a particular instrument depends on the acoustics - your speakers, your room and your hearing(*). Quality of mix is #1 because if the information is lost in source it's lost permanently. However if one audio engineer takes a track some people claim it's 'muddy at the low end', 'wobbly at the top', and claims to see no problem in the frequency analysis, then it might be the problem in the listener or his equipment.

(*) not only the health of your ears / frequency range, but also musical hearing, the ability to recognize unique sounds.
N

luv2hike said:
There is a typo in the official lyrics post on the YT video, unfortunately. But it's plain as day when you listen to the song.
The start of the 2nd verse Bruce sings "holding on to fury", not jury, which makes a lot more sense.
Click to expand...

From Hollywood to Birmingham sounds like an episode of Only Fools and Horses!

Staff member
Hollywood to Babylon works for me

Nature's Beast said:
From Hollywood to Birmingham sounds like an episode of Only Fools and Horses!
Click to expand...

Son of a Gun

I really like this cover. The singer is amazing!

I do too. i think the original video would be ok with the sound off. I’d LOVE to see an animated series/comic re all the characters. Someone in it needs to say the “empire” line. It also refers to EOTC.

If this is their last, & then the band have excelled themselves.

I’ve just come out of hospital, funnily enough with very low iron, & thinking of this cheered me up. I know the band won’t disappear, but wouldn’t it be great if, in said hypothetical series/comic, they *actually did??* Will soften blow too. xx

lovey said:
I’ve just come out of hospital, funnily enough with very low iron, & thinking of this cheered me up.
Click to expand...