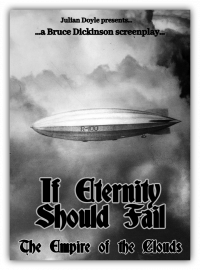 A special announcement from Bruce:


Ladies and gentlemen, I am proud to be the first to announce a brand-new film written by yours truly - If Eternity Should Fail: The Empire of the Clouds! As most of you are aware, I wrote a nearly twenty minute song on Iron Maiden's last studio album, The Book of Souls, called "Empire of the Clouds", which was based on the tragic story of the R101 airship which crashed in France and ended up being the death knell for UK dirigibles. I've spoken before about how I wanted to adapt the song into a visual format, but this ended up turning into a nearly six hour screenplay that was whittled down to a still sizeable four.​
​
My friend and accomplice on my previous film, Chemical Wedding, Julian Doyle, jumped on the idea as soon as I sent it to him. We worked on a much bigger budget this time, with me working as a creative executive with him while touring the globe for my book, What Does This Button Do? Luckily for us, the bulk of filming was already done by the time we were hit by COVID-19, and in these past months the finishing touches have been worked on, and we are incredibly excited to present the final product to the world.​
​
While the original song only dealt with the fatal flight of the R101, the film is much larger in scope. We are using the term 'Empire of the Clouds' in reference to the United Kingdom itself, and their hope for pioneering the world of aviation with their Imperial Airship Scheme. It spans the course of ten years, from 1921 to 1931, and within we explore not only the brains behind the project, but also the lives that would be lost to an overwhelming amount of hubris. The film culminates in the fatal crash of the R101 and the devastating effect it had on the nation.​
​
The soundtrack to this album is something truly special. I came up with the score myself and used pieces from my solo career and The Book of Souls to craft it. Some of the bits of that are on this soundtrack album, but we also have some surprises for you all. The two songs that give the film its name are presented in remixed versions to give you all something old and something new - and then two extra-special numbers from Maiden, one a brand-new song and the other an old recording from the Somewhere in Time sessions that we've never released before! Both are, for the first time ever, lovingly presented in our soundtrack. In addition, we've included a bonus disc with Julian and I discussing how the film came together, which I'm sure you'll all love to hear as much as we love to tell!​
​
Preorders for the soundtrack and for the film viewing sessions start on Friday, April 2! Due to COVID, we will not be releasing this film in theaters, but will instead allow fans a virtual experience that you can enjoy from the comfort of your own homes. Package deals for tickets and soundtrack will also be available, and physical releases of the film will be announced at a later date. Cheers!​
​
~ Bruce​
​
P.S.: I can't help but mention that I actually have a larger role in this film than I did in Chemical Wedding. I go under the moniker 'The Historian' and act as a sort of narrator for the film. And that's all I'll say, I don't want to spoil the rest!!!​
​
If Eternity Should Fail: The Empire of the Clouds, Soundtrack Album

Preorder the soundtrack and virtual tickets here and watch the trailer here.

I'm excited as fuck for this, holy shit.

Staff member
Well, it's not a beer, but it's also not an album, so it must be true.

Looking forward to the book edition and tour that will follow.

I was half way through the post and getting quite interested, then I realised of course what day it is.