Like I said, they were great in their simplicity with relation to the concepts of the album, but anyone could draw it. There was no real reason to study it for any hidden messages or anything. I don't feel like when ever I listen to DSOTM I need to crack out the old prism cover artwork and stare at it.

They say never judge a book by its cover. I think that applies to albums also.
A

I have to say I like the new album cover alot better than the DOD cover but thats just my opinion on it.

Maverick said:
I actually resent this "it's-only-about-the-music" attitude. Record releases should be the association of aural and visual art for the enjoyment of both senses. Whereas the music is the core, the artwork is making it more enjoyable -- a bit like a good-looking woman properly dressed.
Click to expand...

"Good-looking" and "properly dressed" are both appealling to your visual senses though. Maybe a good-looking woman, who also provides intellectual conversation, would fit the bill better.
A

Well, there aren't so many of them... but I know some!

A Vivid example of masculine pulchritude

Maverick said:
Well, there aren't so many of them... but I know some!

Conor said:
And on The X Factor, the inside image was originally going to be used but Maiden sold out and decided to use the now official front cover.  This was to avoid problems with shpos stocking the record.
Click to expand...

Taken from the commentary:

Because of potential marketing issues in various countries, The X Factor is also available with an alternate and less graphic cover which depicts from a distance Eddie in an electric chair.
Click to expand...

I think the cover wasn't officially censored.  Maiden self-censored it because they knew they would sell more copies that way.  They wanted to avoid controversy so chickened out (IMO).

It's called being smart, not being chicken...
A

Thingfish said:
And here it is!! 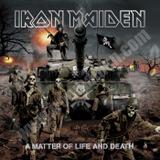 Its cool but Eddie needs to be MUCH bigger, he's the smallest thing on the album cover!
D

you should get the cd too... much easier to care for.
A

DREAMASTER said:
That's why I'm going to buy the vinyl version of the album

Onhell said:
Better than Dance of Death
Click to expand...

I was afraid of the new cover, because the last one was really disappointing.... But I really like this one, I think its good and shows Maiden spirit.
A

rainmaker_2413 said:
I have to say I like the new album cover alot better than the DOD cover but thats just my opinion on it.
Click to expand...

I agree, obviously, but had the DOD cover been "hand-drawn" (like the backdrop they  have on the Death on the Road DVD), my vote would go to that one.

In all honesty, I don't find the new cover all that inspiring.
A

you can't see Eddie that well, and he should be in the center I think!! The single artwork is much better!
I

To be honest, Ladies and Germs, I'm not too fond of this one. It's a far cry better than Dance of Death, but it still isn't up to the standard I've come to expect from Maiden albums (yes, I know that artist is being a wanker and won't draw for them anymore). It just doesn't compete with what we've seen before on Brave New World, Powerslave, or Killers.
As for the album adding to the music, I have to agree to an extent. Interpreting the album art is every bit as essential as interpreting the music and lyrics. It's all part of the message the artists wanted to convey to the listeners.
That being said, I found that Dance of Death is by far the best overall album (music-wise) despite it's godawful cover. I guess the best conclusion is that a good cover can enhance the music, but a bad one will not usually detract. (There's probably faulty logic in there, but it works for me right now)
A

Does anyone know where I can find this cover art image without the album name.

Anyways I would have to rank this album cover up there with Somewhere in Time and Powerslave. Very awesome looking cover.
A

Anythings an improvement afet DOD. But i liked the new artwork. I Think the one one the tank is Bruce.( somehow reminds me of him, cant think why.)
A

fenderhwy1 said:
I Think the one one the tank is Bruce.( somehow reminds me of him, cant think why.)
Click to expand...