There's definitely some very blatant homages in it, Overkill by Motorhead and similarities with Hit the Lights including a very blatant copied section, which I'm sure both are on purpose to fit in with the albums theme, i.e. they are references from Metallica's teenage days.
Last edited: Nov 29, 2022

Poto said:
If Maiden did this we would never hear the end of it.
Click to expand...

If Maiden had a snake pit equivalent, I would consider it

srfc said:
If Maiden had a snake pit equivalent, I would consider it
Click to expand...

There's something about the whole "snake pit" idea that divides the audience and I hate that. At a Maiden concert, the audience is one and the energy is just great throughout the entire audience.

When I went to see Rammstein this year me and my dad were in the GA zone. The pit is called the "Feuerzone" (firezone) and there energy there was just unreal but the energy in the GA was so crappy. It really felt like me and my dad were the only ones singing along. Glad I get to be in the feuerzone next year though but I'm really happy Maiden doesn't have such a thing.

its_ArchroniX said:
Glad I get to be in the feuerzone next year though but I'm really happy Maiden doesn't have such a thing.
Click to expand...

Some shows do have a golden circle. Bergen next year has one. Ljubljana too I think which to me is surprising given it's a fairly small indoor arena.

Poto said:
Some shows do have a golden circle. Bergen next year has one. Ljubljana too I think which to me is surprising given it's a fairly small indoor arena.
Click to expand...

Oh I had no idea actually. Never knew Maiden shows had a golden circle area...

Glad the Ziggo dome in Amsterdam doesn't have it at least

Glad the Ziggo dome in Amsterdam doesn't have it at least
Click to expand...

It's not unusual for big outdoor shows.

Nearly 5 grand for a meet and greet, some merch tat and 3 beverages. Jesus wept. 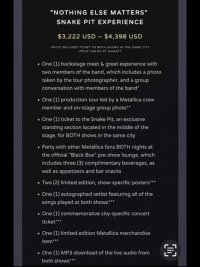 Spaldy said:
Nearly 5 grand for a meet and greet, some merch tat and 3 beverages. Jesus wept.
Click to expand...

And the band went kerching!

its_ArchroniX said:
Yes and at the expense of the fans because this schedule is pretty ridiculous. I get that they're getting older. I mean, we're on an Iron Maiden forum and we all know what it's like to see your favorite band get older.

Personally, I just think it's ridiculous that you can only buy a ticket for both shows, not for separate shows (these tickets are apparently coming in January 2023 but I think they will sell out in no time). And as I said in my post above, some people don't live near a venue. It surprises me that Metallica thinks people will drive up to 5 hours one day, then have "a day off" and then drive up to 5 hours again the day after. For me personally that would cost me around 300+ euros for a single day already not counting food or merchandise I might buy there. Let alone 2 days.....

Mark my words, there is no band that would pull this off other than Metallica. Even for Iron Maiden, such a schedule is pretty deranged. Imagine if Maiden did the same thing with the Future Past tour, have 2 concerts in the same city and then only sell 2-day tickets with a 1-day gap. I guarantee you people would lose their minds over it.

I love Metallica a lot, maybe not as much as Iron Maiden and Rammstein but they're one of my first metal bands and I'll always listen to Metallica with a smile on my face. I'm really excited for the new album but the tour is a failure in my opinion. I have a lot to spare to see my favorite bands live, but this is going too far for me.
Click to expand...

I do think it'd be a nightmare if they had both the two-date deal and individual dates go on at the same time. I feel both types of consumer -- the one interested in the whole weekend and one interested in an individual show -- would get screwed over if the sale windows were simultaneous.

They had the same operation for the 40th Anniversary shows where the seats you bought were the same for both gigs and I believe the weekend deal also went on sale first.

Flaming Blimp Crash said:
By the end of next year, James, Kirk and Lars will all be 60.
Click to expand...

Nothing else matters put experience.
It would be a big troll if they don’t play that song after all

I don't think he's in the band anymore.

Damn, our favorite bands are getting old. We too

Edington said:
This album wishes it was anything like Senjutsu.

Not sure they want to release a snoozefest!

Edington said:
it's pretty good, fun and catchy but breaks no new ground.
Click to expand...

Why new ground? It's a song in their old classic style, the fans are satisfied and I think that's the reason why it was released as a first single. It's also not the album opener. I'm sure the album will have more ''deep'' and interesting songs that will show their recent (or maybe new?) style. About the old bands, songs that break new ground are usually one/two per album or none at all.

srfc said:
not mad about the polished production since they are clearly going for an NWOBHM vibe but otherwise I dig it.
Click to expand...

It's understandable though. ^This can only be done by Maiden nowadays.

Poto said:
and they aren't the live band they used to be.
Click to expand...

Poto said:
It's cool what they are doing next year but give me Maiden's approach every day of the week.
Click to expand...

Eddie620 said:
Anyone else think this could be at least a partial concept album, with a unifying theme through some of the songs rather than a complete story?
Click to expand...

Looking at some of the song titles, it's possible.

Kalata said:
Looking at some of the song titles, it's possible.
Click to expand...

I think the single sounds like it's part of the concept too, as I said above, it's very obviously reference early teenage Metallica

I get the impression it'll be a concept album the same way Death Magnetic was where everything was about, well, death. There's no narrative connections like on Seventh Son, but everything ties to a common theme at least.

Flaming Blimp Crash said:
I get the impression it'll be a concept album the same way Death Magnetic was where everything was about, well, death. There's no narrative connections like on Seventh Son, but everything ties to a common theme at least.
Click to expand...

Based on James’ little blurb with the release notes, that is what it seems like. The concept is youth. It’s a very clever way to find inspiration in a style of music you played as an 18 year old (aka 72 seasons) as well as a clever way to wrap a concept around being a legacy band - ie the songs try to sound like young Metallica because they are “about” young Metallica.

New album is going to be 77+ minutes long. Can anyone write a 45 minute album anymore? They need a third party in there to trim the fat. I didn't think Hardwired was a bad album, just way too boring because it goes on forever. And I know some nerd is gonna come in here and say "well actually it's only 85 minutes not forever idiot", but it sure feels like it.

Some will make the argument too that I don't have to listen to the full thing. I can just go back to the songs I like. I do that with every album, and I don't listen to a full album everyday, but it's the principle. A good album should be able to be sat down and enjoyed in one sitting, and there certainly are long (70+ minute) albums I enjoy, but 77+ minutes of new Metallica sounds like a nightmare in one sitting.

I'm a fan of longer albums in general. I know folks talk about Metallica and Maiden both needing to "trim the fat," but ask 10 different fans of each band, and you'll get 10 different opinions about which parts of a song are actually "fat." I'd rather bands just do whatever the fuck they want and enjoy themselves and I can take it or leave it if that's my wish.
You must log in or register to reply here.
Share:
Facebook Twitter Reddit Pinterest Tumblr WhatsApp Email Share Link
Top