I'd like to give some names, but I'd advise you to read the wiki sites as well, and don't be put off by a first or second song, because most bands did quite a lot of different things.

The two oldest and perhaps most influential:
The 3rd and the Mortal (Norway) &
The Gathering (Holland)
The Gatherings most famous (and best?) song: Strange Machines, from their famous album Mandylion. Impossible to not automatically headbang on this one. A classic! Check the crowd!

Check this song Black Light District. Be patient and see how this develops.
Other work: Broken Glass

These are not the easiest bands to get into, though. The Gathering changed did new things on about every album, and 3rd and the Mortal made both short, acoustic stuff but also longer epic and complex songs.

Autumn (Holland) started of as a doomy/dark/gothic kind of metal band. I always loved this song "The Witch in Me", it rocked as hell, live. Now they have a different singer, more rock orientated. Still good, but different.

Nemesea (Holland). If you ever come upon the album Mana (2004), it's a fantastic album with progressive metal elements, great vocals and melodies. High level guitar and bass playing. Later the band started writing simpler songs and I thought that was a big let down. Check this epic stuff.

You could say that my country exports the leading "clubs" in the top league, yes.

Featuring Mark Jansen (Epica) alongside Jack Driessen (ex-After Forever) and Frank Schiphorst, will release its debut album Quarterpast, on May 20 2011

Staff member
I heard that MaYaN song, it's great.


Forostar said:
The Gatherings most famous (and best?) song: Strange Machines, from their famous album Mandylion.
Click to expand...

This is amazing. Great vocals

You already posted Autumn on another thread, not my cup of tea, sorry

This is also very good.

Night Prowler said:
You already posted Autumn on another thread, not my cup of tea, sorry

Yes, but this is very different from that, stylewise.

Lunatica is female fronted and pretty good. Sirenia has female vocalists... That's all I can think of at the moment.

Staff member
my favorite is Lacuna Coil, but you don't like them...

Edenbridge is good, very uptempo but symphonic. Their best IMHO is the album "Solitaire."

Within Temptation's first album was good but they've got to crap since then.

Amberian Dawn have flashes of brilliance, but some of their songs are just so bad that you want to collapse into laughter.

Both incarnations of Nightwish are also pretty good, can't decide which one I like better yet.

Has Nightwish released a second cd with the new vocalist? seems forever ago they released dark passion play

Staff member
It will come out by the end of the year, I think. Annette is better than Tarja, btw.

OH HELL TO THE NO!

You have to specify. Is she technically better? No. Better voice? No. does she FIT better with the band? I think so. I think Tarja's voice, while the band's trademark was also, in a way, holding them back. Annette gives the band more flexibility in what they can do.

Onhell said:
OH HELL TO THE NO!

You have to specify. Is she technically better? No. Better voice? No. does she FIT better with the band? I think so. I think Tarja's voice, while the band's trademark was also, in a way, holding them back. Annette gives the band more flexibility in what they can do.
Click to expand...

I think this is accurate, which why I'm still this way/that way on which is better. I mean, Wanderlust is the BEST example of how awesome Tarja was, but Dark Passion Play was the album they never could have made with her... and it was, to me, the epitome of symphonic metal and their best work. I think I won't decide and just enjoy all of them

Onhell said:
does she FIT better with the band? I think so.
Click to expand...

This almost 11 minute The Gathering track was released for free one hour ago:

I love the keyboard part starting at 4:22, the whole is quite grabbing, giving a kind of transy feel.

If for no other reason than the Pink Floyd reference ("heroes for ghosts"), I'll give it a listen. So, I did.  It was okay.  Some nice vocal melodies, kind of cool, but not exactly gripping -- more like soundtrack/mood music than an actual song.  (Not unlike some Pink Floyd material!)  I'm generally a sucker for female singers, and her voice is pleasant enough.

Song or not, I thought there really was a suspenseful build-up going on there. Cool you took a listen.

Staff member
I can't believe I forgot to mention WARLOCK!

As an 8 year old, this was one of my favorite albums: 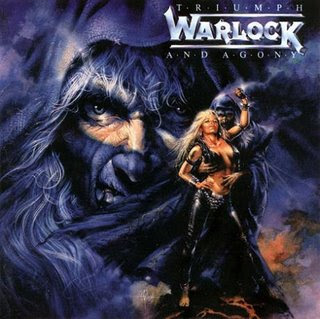