MAIDEN TRIVIA OF THE DAY

Luisma said:
Awesome man! Hope today you celebrated with some Sanctuary and more!
Click to expand...

A bit of Victim of Changes more like, "you realise you're getting old and no one seems to care" 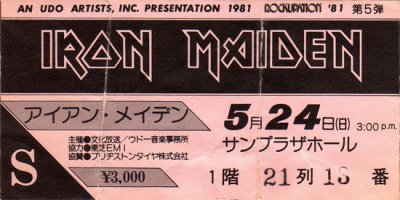 MAIDEN TRIVIA OF THE DAY – 最後の日本の日付​

40 years ago, Maiden did something that most band’s today wouldn’t even think about… Play two full concerts on the same day and with about 4 hours between them. The place was the Nakano Sun Plaza Hall in Tokyo, a place that holds 2,222 people and that had been sold out months before Maiden even started the tour.

There were some mixed feelings on this concert, on one side, the entire band was extremely happy to play this last date of Japanese Leg of the Killer Tour, due to the fact that all the dates had not only been sold out long before the tour even started, but on the other side, Steve by now is really concerned about Paul’s attitude and problems and just can’t keep off his mind that a change is almost inevitable… Will the band survive if Paul leaves? How are we going to finish the tour? These questions would have to wait because there’s still a full leg to go on… Fortunately also, the day after the concert is a free day so the band can relax and buy a bunch of audio equipment while sight-seeing and then…

Want to know what really happened between this gig and the end of the tour? How about the true story about the outing of Paul, Clive and Dennis with precise dates of events that ended up causing the changes the band made in order to become a Monster Of Rock! Is all here, no theories, all FACTS… EDDIE MADE ME DO IT (THE RISE OF THE BEAST 1975-1987) at https://www.subscribepage.com/eddiemadedoit


MAIDEN TRIVIA OF THE DAY – THE CURSE OF COMING ON SECOND

The first time that Steve went before an audience that wasn’t mainly family and friends was at a talent contest called the Aberfeldy Street Festival, organized by Dave Beasley (later to be known as Dave Lights) at St. Nicholas Parish Community House, in London's Poplar district. The story is famous for many reasons and one of ‘em is that the band (Influence) came on second, with the winning prize going to a sort of Osmonds (a family group) style-band.

It is strange to imagine that a band such as Maiden would play in a talent show, however, during the late ’70’s this kind of shows were constantly being held in schools and pubs around London, and it was definitely a way to make yourself know plus win some extra money (or at least some cans of soda, beers or whatever).

The first time that the band entered a talent contests, along with six other very diverse bands, was on November 13, 1976, at the Queen Elizabeth in Romford. On that occasion the band played two of their numbers, and although both numbers went down very well with the crowd and the judges, the sympathy vote was given to a little boy who played the acoustic guitar, and Maiden on second.

The next time that the band tried their luck in a talent contest was actually on May 31, 1977, this time on a not so common place, the Greyhound, in Chadwell Heath. The Greyhound used to feature many Punk bands (as most of the pubs in ’77) but this was definitely an opportunity to play in front of a different audience, so Paul Sears, managing the band at the time, decided to sign up the band for the show.

According to the recollection of some people who attended the show, there were about 10 different bands participating, and even when Maiden was definitely not a punk band, they could definitely put on a show and actually play (something that most punk bands couldn’t really do) so once again our beloved band did great, however, once again they came second.

Want to know the exact setlist that Influence and Maiden played on these occasions? Where else did Maiden played on a not-so-common-place just because they needed the money and to play? How about getting a detailed history of the band with dates, places and tons of trivia facts of the days when Maiden was just another pub band? Well, now is your chance, just go to https://www.subscribepage.com/eddiemadedoit and order the book with a very, very, very special price! 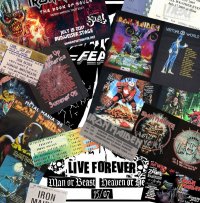 RAIN OR SHINE – MAN OR BEAST – WAITING FOR THE 15TH – WITH THE TRIVIA OF THE BEAST​
So we’re all waiting for July 15th Maiden revelation, and while we wait why don’t we take a trip down memory lane and remember the things the boys have done on that date?

Maiden’s first concert on July 15th, took place at the Cart & Horses in Stratford in 1976. This one was followed by the one they played the following year at the Harrow in Barking.

4 years would pass until the boys played again on the date we’re talking about, this time in a whole other country and with a very different line-up than the one that had performed the other 2 gigs. This one took place at Hara Arena in Dayton, USA. This one, of course, was the only time that Di’Anno performed on this date with Maiden.

The first time that Mr Bruce Dickinson would perform with the Maiden boys on the 15th was at the Nassau Coliseum in Uniondale during the Seventh Tour Of A Seventh Tour.

1992, also saw Eddie and the boys play on July 15, this time at the Starwood Amphitheatre in Nashville, Tennessee.

Blaze, while fronting Maiden, also played on the date we’re talking about. It was during the Virtual XI World tour in a place called The Joint at the Hard Rock Café in Las Vegas.

Amazingly enough, 7 years would pass until Maiden played again on July 15th, this time at the Tweeter Center in Mansfield, New Jersey.

And now, the last time (for now) that Eddie and the boys were on stage on the now expected date was at the Budweiser Stage in Toronto, Canada, during the Book Of Souls Tour…

While we’re waiting for the big reveal on the 15th why don’t we relieve Maiden’s history with a nice read? https://www.subscribepage.com/eddiemadedoit 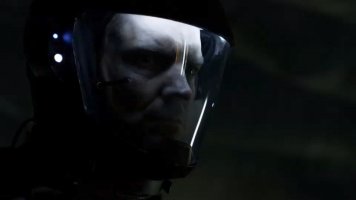 Is not the first time that Maiden makes reveals something on July 13th. Today, 11 years ago, Maiden premiered the "Director's Cut" video for 'The Final Frontier' on their web page.

Created by Darkside Animation Films and directed by Andrew Bishop & Nick Scott, The Final Frontier stars a grizzled space-pilot known as "Cleaner Six", played by Icelander actor Gudmundur Thorvaldsson, who we find in the final stages of some gruelling, complex job. Called on the radio, Cleaner Six reports his progress to an unnamed base. "I had something to put to bed back there," he snarls... "It is now nicely wrapped in a napalm blanket – but I've got the key. I'm about to make Planet Four, locate the relic, and then I'll serve up the ashes of that wart of a planet ... " and then our beloved Eddie, or shall we say, Freddie, appears as the foe of our Hero and boom! the song ‘The Final Frontier’ starts as we get images of a space chase ala Star Wars amidst an asteroid field until Cleaner Six manages to shoot down Eddie and descends into Planet Four.

The scene changes and we get images inspired by the Indiana Jones movie Raiders Of The Lost Ark filmed in Rendlesham Forest, a fitting place due to a series of reported sightings of unexplained lights and alleged landing of a craft of unknown origin. What follows is chase that ends up leaving our dear mascot as we see him in the sleeve art of The Final Frontier album.

The production cycle of the video went over 8 weeks from concept to completion. A total of 141 shots combined live action with integrated CGI as well as full 3D animation, resulting in a complete running time of five minutes.

Want to know the complete and detailed story of the band between 1975 and 1987, in a way never told before? Join the fun at https://www.subscribepage.com/eddiemadedoit 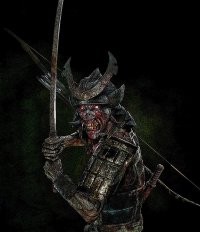 So, we finally have the announcement of a new Maiden studio album! Senjutsu bound to be released on September 3rd, the same date that saw the release of Powerslave 37 years ago, the release party for the Dance Of Death album 18 years ago and the release of Adrian's book, Monsters of River & Rock: My Life As Iron Maiden's Compulsive Angler just a year ago, is a LONG album (double-album), with at least 3 songs ('Death Of The Celts', The Parchment' & 'Hell On Earth') passing the 10-minute mark and giving us a new Maiden's fourth longest song, written by Steve Harris.

TRIVIA FACTS ABOUT THE ALBUM

1. 4 songs written solely by Harris; a fact that did not happen since Virtual XI.

2. The title track is the first track of the album and was written by Steve and Adrian, the only other time this has happened before was in 2010, with the release of The Final Frontier.

3. Is the first time that an album has 3 songs written solely by Bruce and Adrian.

4. Under 82 minutes, is about 10 minutes shorter than their previous album, The Book Of Souls. So yes, is Maiden's second longest album.

5. For the third time in their career, the album was recorded at Guillaume Tell Studio in Paris, France keeping up with the tradition that started in 1983 of recording at least 3 albums in the same studio. Note: They have only broken this tradition with The Final Frontier which was recorded at Compass Point Studios, making it the only time Maiden has used the same studio more than 3 times.