Iron Lurker said:
After a couple listens trying to decide if I will buy or not. I also found the lyrics to be pretty cheesy as well. The intro to Hellfire is embarrassing. I have always like Ripper but some of the OTP “WHAahWHAahWHAah” vocal deliveries add to the cheese for me. The album comes across that KK is trying to “out Priest” Judas Priest. Best song by far is Return of the Sentinel even though I have a bit of an issue with him revisiting that. Is he going to do the same with Painkiller at some point? That said a lot of the music, riffs, and solos are pretty good. I guess the 80s version of myself would like this album a lot more lol. Regardless I hope the album does well and I will go see them if they ever tour near me.
Click to expand...

I’ve decided to buy it today because I’ve had too much fun listening to it for it to not deserve my money. There’s no real bad tunes, just cheesy ones and then you hear a gorgeous twin lead and you don’t really care.

Kalata said:
KK's album is good - filled with great riffs, solos and some nice choruses. Not so much variety in the songs though. KK does a lot of shredding.

The best song is: ''Return Of The Sentinel'' (without a doubt)
My favorite songs are: ''Hellfire Thunderbolt'', the title track, ''Raise Your Fists'' and the closing song.


The album's intro is evil.
The song with the title in a foreign language has a brutal riff, nice melodies and verses.
''Brothers Of The Road'' is a nice fun rock song.
''Metal Through And Through'' sounds like a Manowar song a lot. Very good song.
''Wild And Free'' is a good fast short rocker. The chorus is catchy.
''Hail For The Priest'' has a great riff, twin-lead guitar harmonies (with ''ahhs-ahhs'') and a nice verses/chorus.
Click to expand...

Yup, it's entertaining. Credit where it's due: either you like the record or not KK made sure all songs are firmly within Priest's scope and while not being top tier material there are some really interesting and thrilling moments here (others not so much). Some brief takes on each song:

Hellfire Thunderbolt main riff is almost identical to the one on Nostradamus. The chorus is too much linear for my taste but hey... overall enjoyable.
Sermons Of The Sinner is my favorite track from the lot. Although being absolutely straight forward this damn thing is really intense, fast and particularly vicious (the whole band is on fire but man... Owens is simply killing). IMO this should be the opener and not Hellfire Thunderbolt.
Sacerdote Y Diablo is the first track here that reminds me a bit of Night Crawler ambiance but unlike Hail For The Priest I think the riffing is a bit forced and something sounds off.
Raise Your Fists is your typical more commercial 80's Priest sing along but still a cool one.
Brothers Of The Road goes down the same style than Raise Your Fists but IMO is really cheesy and cheap. Meh.
Metal Through And Through is KK pulling a Manowar. And a pretty cheap one to be honest. Those guitar harmonizers have nothing to do with the song, has cliche written all over, alas.. Skip it.
Wild And Free is 101 uptempo Priest a bit in the vein of Freewheel Burning (while not as fast) and sounds great
Hail For The Priest as I said before has some Night Crawler like vibe but this time it's really filled with energy.
Return Of The Sentinel is also a really well penned tune with lots of epic flavor (and I really enjoy the original's melody reprise rearranged in the end).
So yeah... cool record while being a bit too much generic and not as good as Firepower or Angel Of Retribution. The good news is now we have two "Priests" releasing stuff so it is what it is you know? Everybody wins.

Richie's 1st interview after heart surgery:
Scary this happened to him without any cholesterol or heart history... 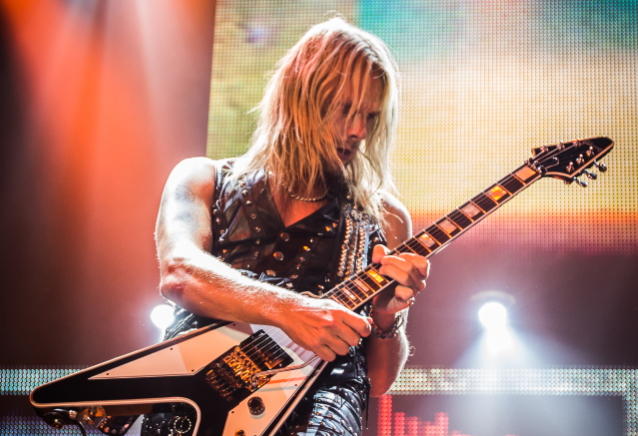 JUDAS PRIEST guitarist Richie Faulkner says that he suffered an "aortic aneurysm and complete aortic dissection" during the band's performance at the Louder Than Life festival. On September 27, one day after PRIEST's appearance in Lousville, Kentucky, the British heavy metal legends announced...

An adverse reaction to a phony painkiller?
Sad to see. Get well soon.

Loving KK's Priest. Nice switching of gears with great playing/sound throughout. Much prefer to Firepower which, apart from Firepower and Heroes, was very tame.

terrell39 said:
Richie's 1st interview after heart surgery:
Scary this happened to him without any cholesterol or heart history...

JUDAS PRIEST guitarist Richie Faulkner says that he suffered an "aortic aneurysm and complete aortic dissection" during the band's performance at the Louder Than Life festival. On September 27, one day after PRIEST's appearance in Lousville, Kentucky, the British heavy metal legends announced...

Blimey! He is lucky to be alive!

I wish him a speedy recovery.

I thought these big bands went to the doctor to check their health before a long tour.
Anyway did he says the cause for this big health issue? It's scary and worrying if you don't have high cholesterol or health problems…
I've seen the video and he looks ok during the whole song. Even he moves ok and shake his head. He is very concentrated during the guitar solo and at the end of the song he quits his guitar and he gets in the backstage.

Aortic dissection? Man, he is lucky to be alive. This will most likely have been a matter of minutes.

Ritchie was lucky, my mother have been throught the same thing, and she was lucky to. This issue can kill you instantly

Shocking story... at least there were a lot of people around him when it happened. Imagine he was alone somewhere... (and all the other conditions he mentioned! Pffffff...)

This was probably something that can't be caught before it happens.

The K.K.’s Priest album is mostly a cliché-fest with super-cringey lyrics, but there are some cool guitar bits sprinkled throughout, and in a few places the songwriting comes together enough that you get a hint of the much better album this could have been if it had spent more time in the oven. There are large sections of “Hail For The Priest” that are really strong, and the tonal curve ball at the end of “Return Of The Sentinel” works really well too. I’m also fond of the guitar work in “Brothers Of The Road”, but the lyrics are just awful.

I’ll be interested to see if the second album pulls things together better, but I probably won’t be spending much more time with this one.

Aortic aneurysm can happen to anybody even healthy people, not just people with heart conditions. But it's rare, less than 200,000 cases per year in the US.

Jer said:
I’ll be interested to see if the second album pulls things together better, but I probably won’t be spending much more time with this one.
Click to expand...

I hope they lean in a bit more into the ‘Return of the Sentinel’ territory on the second one. I enjoyed the 80’s rehashed tracks a lot but I feel KK would do better plundering the 70’s for the next record.

I didn't like the album too much but if they come to Finland I'll catch them for sure. It's KK f*cking Downing after all.

Priest released a compilation album entitled The Chosen Few in 2011 - the album contains Priest songs selected by other metal and rock musicians.

Here you can read their thoughts for the songs: 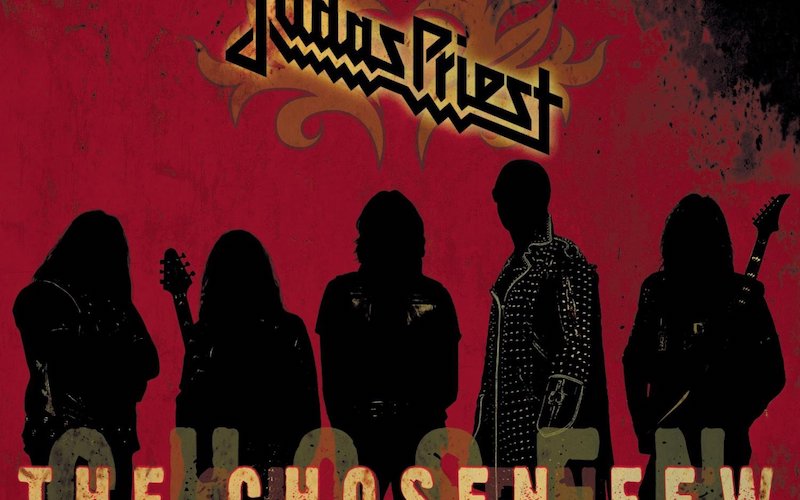 This compilation arrived 10 years ago today with few surprises for diehard Judas Priest fans. The intriguing part was who chose which song – and why.

Also asked: And what is your least favourite and why?

Tipton: Hmm, I think I'll go for Point of Entry. However, I do think there are a few awesome numbers on it, like Desert Plains and Solar Angels.

Faulkner: The album I listened to the least is Rocka Rolla. But if I find it the least? It's more like it was more before my time and I first discovered the more metal sounding records and then Rocka Rolla. As a teenager I did not think it was metal enough, but when I listen to it now, I do hear the foundation for the later Priest sound, so it is an important album.


In another magazine, Lust for Life, Ian Hill was interviewed.

Question:
If you look back, what is the most successful Judas Priest album (not success as in financial, more like asking for an opinion; I could not find a better translation)?

Hill: Rocka Rolla is still dear to me. In strict musical sense British Steel is a favourite. Everything was right. The songs and our image. Via two more albums it led to Defenders of the Faith, that I find just a bit better. Then the experimental Turbo.
Last edited: Oct 19, 2021

Richie's top 3 LPs explains why these songs are on the setlist in the current tour: Freewheel Burning, The Sentinel, One Shot at Glory, A Touch of Evil, Hell Patrol, Painkiller, Exciter and Invader.

Excellent choices. Not exactly my top 3 albums but almost. Those 3 albums are all in my top 4 (first being Painkiller and Sad Wings Of Destiny, third Stained Class and fourth Defenders of The Faith). Furthermore Painkiller, Hell Patrol, A Touch Of Evil, Tyrant, The Ripper, Dreamer Deceiver/ Deceiver, Exciter, Beyond The Realms Of Death, Invader, The Sentinel, Freewheel Burning and Jawbreaker are my favorite three tracks from each of the said albums.

Richie has immensely good taste when it comes to Priest IMO.

I am with Tipton on British Steel and Sin After Sin.