Kalata said:
The song ''Metal Meltdown'' was included in the compilation album Metal Works '73-'93 [1993] (there's also a Priest video documentary entitled Metal Works) and the song is missing the intro which has on Painkiller - any reason for that?
Click to expand...

Only on the first issue, the intro is on the remastered version. I've no idea why

Been listening to various records throughout the day but from Priest I relistened to Defenders Of The Faith and Killing Machine. Defenders I will compare to SIT, it has that commercial feel to it which doesn't get properly recreated live. The Sentinel is immense and sheer perfection. Other highlights were the other two faster tracks being Freewheel Burning and Eat Me Alive. Great sounding, but that ending is just so lazy. Killing Machine's more raw approach is a good balance between their earlier work and the future more commerical tracks. Delivering The Goods I had forgotten about how good it was, Rock Forever and Evening Star have warmed up to me. Before The Dawn I believe to be one of the most amazing tracks in the Priest catalog from the first run through I did and it remains amazing. Burnin Up and Green Manalishi are also some stronger tracks. I like Halford's more midranged approach from the earlier era I think it adds some variety with them having the different sounding eras while not being so different from each other that one couldn't tell it was the same band.

Trivia for some songs:

- the song ''Judas Rising'' was written (demo tape) by Rob and K.K. during the 80's, but it was not used until 2005 for AOR album.
- the bass intro on the song ''Revolution'' is actually from a cassette tape the band recorded back in the 70's (according to Roy Z).
- the song ''Alone'' from Nostradamus was written by K.K. during the AOR sessions.
- the riff in the song ''March Of The Damned'' was Richie's idea.
- the songs ''Hell & Back'' and ''Metalizer'' were written by the band before Richie joined the band.
- according to Rob, the song ''Secrets Of The Dead'' is about aliens who came to the Earth..., he also said about that song: ''we went to Egypt''.... probably the song was inspired by these ''mystic'' themes and the melodies and the riffs through it are setting the atmosphere for that perfectly.
- Rob wanted the song ''Tears Of Blood'' (from the 5 bonus songs for ROS album) to be part of the ROS album.
- the song/intro ''Guardians'' from Firepower is a leftover from the Nostradamus sessions (Richie said that many intros were left from those sessions).... maybe that intro was written by K.K. who said that he wrote all of the intros on the Nostradamus album.
- the main riff in ''Flame Thrower'' was Glenn's idea.
- the song ''No Surrender'' was Glenn's idea (probably only the music).
Last edited: Mar 4, 2021

- ''Breaking the Law'' and ''Heading Out To The Highway'' both have solo/s during live performances, while they do not contain any solos in the studio versions.

- ''Breaking the Law'' and ''Heading Out To The Highway'' both have solo/s during live performances, while they do not contain any solos in the studio versions.
Click to expand...

terrell39 said:
I remember seeing Priest on Turbo tour (I think 1st tour they made those additions to the songs) and thinking the solos fit well in those songs
Click to expand...

If I'm not mistaken, the solo on BTL is done on every tour after SFV tour (from 1983 onwards... see Dortmund '83 concert). And the dual solos in HOTTH are done from 1986 (Turbo tour) onwards - and yeah, the solos fit great in both songs (I wished they were in the studio versions).

My ''best of'' from the Jugulator & Demolition albums:

1.Burn In Hell
2.Feed On Me
3.Hell Is Home
4.Close To You
5.Bloodsuckers
6.Bullet Train
7.Lost And Found
8.Cathedral Spires

Two awesome ballads, great epic (''Cathedral Spires'' is a gem with a great chorus), some Painkiller-style riffs in ''Bloodsuckers'', the best song from this era (''Burn In Hell''), good chorus (''Hell Is Home'')....

So, let's put things simple from the get go ok? With 45 years in their shoes being able to pull an album with such quality is almost impossible. And nevertheless Priest pulled it. So, as you all can easily predict I simply love this thing. All bands have late career great albums but something like this is such an anomaly in Heavy Metal history (and rock in general) it should remembered. Man... roughly two thirds of this adrenaline filled beast was made by two near septuagenarians.

The title track comes destroying absolutely everything in its way: a Painkilleresque opener that wouldn't sound slightly below quality level on Painkiller intself. Simply put: heavy as hell pedal to the metal headbanger. And how's Rob's high pitch voice? Man.. it sounds so much better tan in the last album! I don't care if Andy Sneap pulled out lots of rabbits from his hat while producing this thing or not... fact is the voice sounds superb. And what's next? Ah! Lightning Strikes: a 100% epic display of heavy metal perfection, strength and pomp, once again in line with Halford's heaviest recordings with the band. Speaking about heavy... Evil Never Dies keeps the quality absurdly high and the riffing here is tremendous. And while the pre-chorus kinda eludes us into a more radio friendly direction, the ensuing refrain comes crashing down with the force of a thousand anvils while doing justice to the track's name. Never The Heroes is much more melodic but damn! What a perfect song! The level of these first four tracks is absurdly high! What a mind blowing sequence to open the album with! Will the band be able to keep this absolutely relentless pace? Well, Necromancer comes stomping like a brute and although I'm less into it than its predecessors it's still a great tune. Aggressive and sharp as knives this thing takes no prisoners.

Children Of The Sun is a clearly an early Sabbath influenced mid paced tune, with a strongly marked cadence. Good track but my least favorite so far. The Guardians/ Rising From Ruins combo is also interesting but by now it seems Priest are trying to dig way back into their vaults in search of their 70's flavor. And if the initial songs worked out perfectly (based in a much more recent Priest typology) these 3 are a bit less achieved since 70's Priest has such a unique magic. Nevertheless they're all truly well composed and enjoyable tunes. Flame Thrower follows, a ok-ish heavy song and by now, although not compromising the album's quality the slightest, it seems like this thing started to lose a little bit of momento. Well there's a good remedy for that. Just throw in a pair of almost perfect tunes in the forms of a vicious as snakes song in Spectre and another utterly epic hymn in Traitors Gate. As a result, Firepower regains its relentless pace in a stellar way and the really addictive sing along hard rocker No Surrender closes this sequence in a hugely high note.

And I truly think this should be the last song on the album. Why? Because Lone Wolf is an absolute filler and Sea Of Red is merely ok (once again a evocation of the 70's). And while being by no means bad quality material it elongates an already lengthy array of songs without any need (Damn! 14 songs is a lot!) and kind of breaks the almost pristine overall quality of its predecessors. If the band cut 3 or 4 songs from the record I think this would be easily one of Priest's top 5 records. Nevertheless this is still a spectacular soon-to-become-classic album. Especially when you take in account how late on priest's career it was released, solidifying them as one of the greater (if not the best) veteran metal bands still DEFENDING THE FAITH!

What's next to come? I don't know... but taking in account the number of times Priest surprised me I won't even dare guessing.

I always thought that the twin-lead guitar harmony after the solos in the Priest song ''Deal With The Devil'' (2:56-3:03) sounds like an essential harmony of Maiden... this is not surprising since Roy Z co-wrote that song (along with Rob, Glenn and K.K.).
He is also the producer of the Angel Of Retribution album.... (curious: the album won an award for best album cover).


I guess he learned this essential harmony for Maiden from his time playing with Bruce and Adrian...

The solos in Deal With the Devil are impressive, like prime era Priest.

The solo section and bridge are the best but for the rest it is Resurrection's "Made in Hell" again (which as a whole I find a better song).

Forostar said:
The solo section and bridge are the best but for the rest it is Resurrection's "Made in Hell" again (which as a whole I find a better song).
Click to expand...

... and the first riff from Made In Hell is tne bridge before the break in Helloween's I Want Out (and also slightly reminds Dickinson's Road To Hell).

- Heart Of A Lion (later given to the band Racer X)
- Prisoner Of Your Eyes (cut version from 7 minutes to 4:30 minutes)

The songs were released as studio recordings in his Live Insurrection (2001) live album. Both songs were written around the Turbo era.

no songs from the 2 albums with Ripper Owens, because otherwise the list will be full of them.
1.You Say Yes
2.Epitaph
3.Winter Retreat
4.Run Of The Mill
5.Raw Deal
6.Here Come The Tears
7.Dying To Meet You/Hero, Hero
8.Love You To Death
9.Death
10.Love Zone

The song ''Caviar And Meths'' from Rocka Rolla is a short instrumental (2:02), but the original version of it was a 14-minute song penned by Downing, Hill and Atkins. It could have been the longest Priest song, but due to time constraints, only the intro was recorded for the album.

Someone had said that the solos in the song ''Future Of Mankind'' sound like a Maiden solos and I agree, but the solos in ''Cold Blooded'' (from ROS) are probably the most Maiden-esque solos from Priest - Richie pays tribute to Dave and Adrian.

On the other hand, the most Pirest-esque solos from Maiden are probably the solos in ''Weekend Warrior''.

KK revealed that ''Never Satisfied'' (from Rocka Rolla) is probably the Priest song that was written the earliest - around 1968/1970! 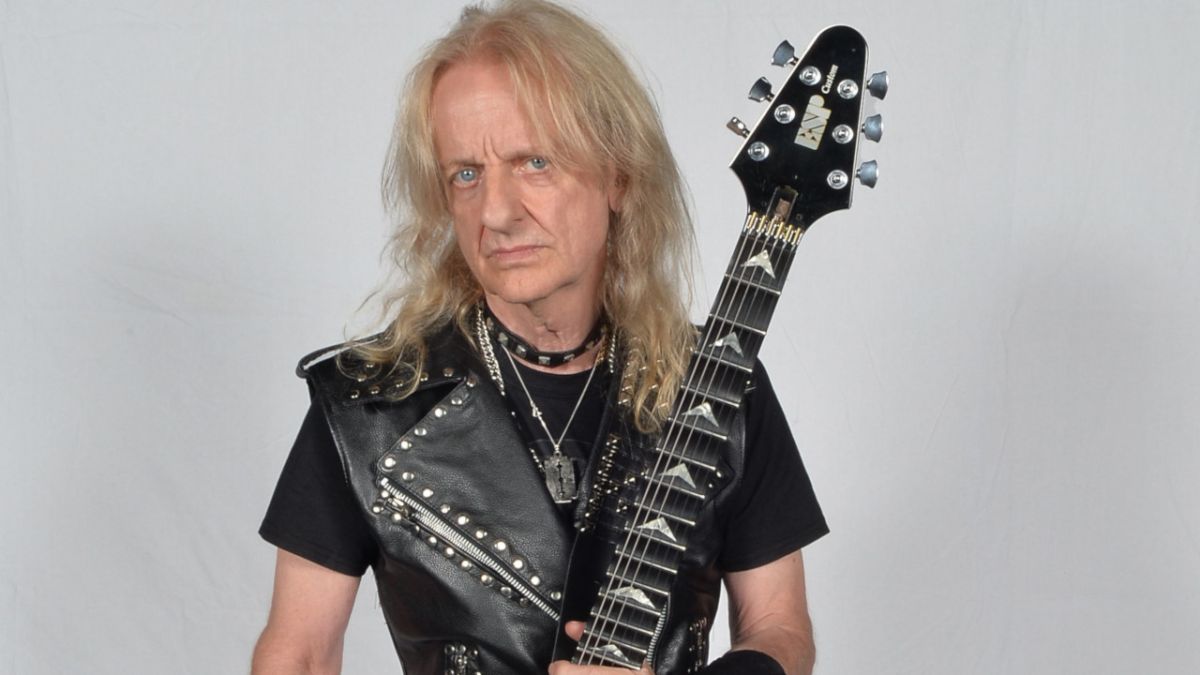 KK Downing: My Life In 10 Songs

Kalata said:
KK revealed that ''Never Satisfied'' (from Rocka Rolla) is probably the Priest song that was written the earliest - around 1968/1970!

KK Downing: My Life In 10 Songs

Also the best song on the debut album (and the only one worth playing still).

I love this Armored Saint cover:

Cosmiceddie said:
Without a shadow of doubt, 'Run Of The Mill' is the highlight thereof. Halford did a brilliant job there, hats-off.
Click to expand...

Run of the Mill is so damn amazing.
M

Cosmiceddie said:
To me 'Last Rose Of Summer' and 'Here Come the Tears' are the highlights of the album. They prove what an amazing singer Halford was back then, second to none.

Judas Priest have always been great with ballads.
Click to expand...