____no5 said:
The purpose of this post is to explain why I gave so many 2 -5s for songs that are objectively good as well as my methodology of ranking them. After having done AMOLAD, BNW & I was ready to vote for Killers, I noticed that my ratings were 80% above 8.

I looked my draft notes for the rest of albums and saw a mere 20 songs below 5. What’s the point of a 1 -10 scale then?
I decided to start over with the purpose to distribute the songs more uniformly.
Senjutsu needs some time to sit, so I will exclude it for now. Thus we are talking 152 catalogue songs.

First I put a few songs to no.5 & no.10 positions in order to have some perspective.
I left rating 1 for 2 songs only and distributed the rest 150 songs uniformly from 2 -10. That is 16 songs for each position plus 6 surplus songs, which I redistributed to positions 7 -10. Below how the catalogue distribution for each rating looks like:

Considering that my initial list of 10s would include at least 20 (and more likely ~30) the process was painful and took me a fair amount of time to complete. For example Children of the Damned which was a 10 had to move into 9 rating since the places for 10 were pre-determined to be 18. Similarly many songs were removed 1 or 2 places below the initial draft ranking, for the purpose of uniformity of distribution. If there are 2 songs of rating 9 and one position left I move the one that I like less to 8.
The result is satisfying. Regarding the album ratings, there was a nearly absolute agreement between the average albums scores with the ranking on top of my mind.

I’m posting this now so to have a reference I can hyperlink in my Individual Album Judgement posts and will re-adjust AMOLAD & BNW soon, before proceeding with the rest of catalogue.
I’ve done the ratings for all songs already in an excel sheet and I’ll take a few days more for fine tuning.
Click to expand...

I always struggled with this too, I'd do a ranking and realize I only have like 10 songs below 5. Like, I'd say Octavarium is a good amount of tiers above Lord of Light any day of the year, but it's hard not to give LoL 10 just because better songs exist. I write all the praises in the world and then not give it the highest marks? How can I explain detracting from the score?

Yeap, that's why I wrote this note. I will be likely praising a rated 4 song and some people may say wait what? So I will link the above to my Individual Album Rating posts (where you state all scores and give the average) in order not having to explain (hopefully).

Other than that I am quite happy that I did it with a structured way this time. I struggled a bit (mostly to decide which songs to downvote), but the result is very rewarding.

Staff member
Hi, I've reopened the songs from Somewhere in Time for voting, after resetting the votes. Apologies for the delay, as I was travelling.

Staff member
Hi, I've reopened the songs from Dance of Death for voting, after resetting the votes.

The next album, opening up on the weekend of October 22nd, will be Virtual XI.

For ranking Maiden's Catalogue, my initial plan was to let a few months for Senjutsu to sink in, before rating it.
However the structured approach I followed to rank the first 152 songs (16 first albums) has helped me a ton with the ranking process by helping me build a solid perspective on the catalogue. As a result I don't feel I need to wait any longer.

In the start, I thought to just throw the Senjutsu ratings into the existing pool of rankings without restrictions, but I realized it might be unfair to it, leading to lower album average. I did some experimental calculations and in deed, it resulted to lower average score than I thought it to be right out of the bat. No, each ranking of the new 10 songs should be interacting with the rest of catalogue, i.e. every new 8 to lead another song fall into 7 etc.

To do it justice, I decided to re-distribute the ratings in a nearly perfect way. In order to elevate a bit the album average I assigned only 9 places for rating 1. For ratings 2 -10 there are strictly 17 places assigned for each one.
The grand total from 1 -10 is now 162 songs. 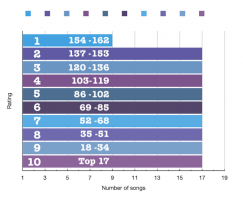 The album average distributions are now:

Similarly with my previous reference post the purpose is to explain why there are so many 2 -5s ratings for songs that are objectively good and why the album averages are relatively low.
Last edited: Oct 28, 2021

Staff member
Hi, I've reopened the songs from Virtual XI for voting, after resetting the votes.