JudasMyGuide said:
Todd McFarlane is a comic book artist who created Spawn, the character on the cover of the IE album.

I fail to grasp how that is relevant, but hey, opinions, man!
Click to expand...

The whole concept of the album is about Spawn. So, in that, it is McFarlane metal.

Not sure what that says about the quality, though. If anything Todd McFarlane is far more creative and interesting than Jon Schaffer so it should enhance it?

I typically agree, but Dream Theater are special.

Detective Beauregard said:
I only shit talk the musically masturbatory part in the middle, which is only a minute or two if I recall correctly. It takes me out of the vibe of the song, and I don’t think it fits. The rest of the song is great, but still not my fave from that album.
Click to expand...

I especially picked out that one, because I actually find the song to go through a rather logical, straightforward development, where pretty much every part reacts to the previous one and the song naturally, pleasantly progresses. Even in the middle part, the digression, you can with ease pick up on how each part results into the next one, usually via the similarity of the riff underneath, similarity of the particular mood or something. Also makes meta-sense - I wrote this about five years ago


JudasMyGuide said:
I wanted to keep this until we get to ToT in the survivor, but what the hell... Take Endless Sacrifice. I have heard (well, read) many times over how the instrumental part is an unnecessary wankery, mindless self-indulgence and it takes away from a great song. I'm sorry, but similarily to Sacrificed Sons or Ministry of Lost Souls, the song would not work otherwise! The song is a buildup of tension and desperation of a very emotionally attached bloke caused by the fact his significant other is far away. The final climax and the final chorus should be the "boiling point", so to speak. In this song (and in those other two, for example) that is achieved by the fact the song returns to familiar themes with increased intensity, but returns from where? I mean - you have to have a digression to appreciate the return, but what should such a digession be? It should be probably heavier than the early part and it should be different enough - the passage they've chosen sounds excellent to me in that regard (apart from the fact I like the King Crimson shout-out there). Ministry - again, the final chorus and Petrucci's amazing solo would have much lesser impact for me if there was no "chug section" or what is the denigrative term the haters use for the song to return from. I take those (any many others) songs as a journey - to me DT is a band that does a lot of detours, but that's also one of the reasons I love them so much. Take these detours away from these two songs and you'll have somewhat simplistic sappy ballads - good on their own, but not excellent, because those would be too focused on the final "goal". To quote Princess Irulan:

"Any road followed precisely to its end leads precisely nowhere. Climb the mountain just a little bit to test that it's a mountain. From the top of the mountain, you cannot see the mountain."

To me it's much easier to appreciate the song from within, if you know what I mean. From the very first moment I heard Close to the Edge by Yes I loved that chorus... and I was waiting the whole "I Get Up" section to get back to it... and it was amazing. To take away the "complication" would be to diminish the song itself.
Click to expand...

And then I come across incoherent grab-bags like A Change of Seasons, that follow no internal logic whatsoever and where the journey is completely pointless, with no goal, no return, no resolution ...
and keep hearing about how early on DT were the geniuses of songwriting and how that went to shit with their needless, pointless wankery etc. later on and I go all "what the frig are you guys smoking?".

Might be, but unless we at least try to get across why something appeals to us (or, if it speaks in a completely subjective way just to me, then how does it speak and what does it tell?), when it all boils down just to "I like it", then I fail to see the reason for being on a music forum whatsoever. It's hardly an opinion, then, mostly just a whim that's here and can be gone the next second. I. e. irrelevant.

Hence my push for "criteria". We might differ in our concepts of what is good songwriting, but I'd like to see a concept at least.

Or, to use a quote from a popular movie:

I disagree that DT is appreciated only for their complexity, technique and mastery. I like them because they're a very good metal band. They could do with less wankery, especially in the keyboard parts, and the vocalist leaves a lot to be desired.

The soundscape, production of Images and Words is especially phenomenal, modern as in 90s modern sound but still having 80s tendencies in the music, synth pads, a bit of funk groove here and there, but with that fat 90s bottom.

Ariana said:
In the end, it's all about taste. Dream Theater does nothing for me, apart from two songs maybe. Iced Earth ranks among my favourite bands. I don't care about complexity, technique or mastery. I like what I like.
Click to expand...

So ice-covered earth tastes better than a theater, huh. I have yet to taste either one.

Metallica. I think Part 1 is the better of the two "Keeper"-albums, mostly because I really prefer Hansen's songwriting to Weikath's (which is also why I like Gamma Ray more than Helloween in general), but, despite its flaws, "Metallica" is definitely the superior album. Hetfield's voice has never before or since sounded as good as it does here.

Priest. My favourite album by them. I have yet to be truly awed by W.A.S.P.

Dream Theater. I don't listen much to them, but when I do, "Images" is one of my two go-to albums. Great from start to finish. On the other hand, in spite of everything Schaffer has been doing, Iced Earth is still one of my favourite bands - however, I've always thought of "The Dark Saga" as a somewhat lesser effort compared to some of their other stuff.

Priest (again). I really like Death, but I don't find "Individual Thought Patterns" to be quite as good as the two that followed it. "Painkiller" is just a timeless classic, though not my favourite Priest-album (see above).

Getting a little nervous here. It's up to LC I guess!

Y’all still have Keeper 2, the real crime is the shafting The Crimson Idol received and the fact that Iced Earth and Death both have no more albums left.

This is really a pity. It was a draw til about 22 minutes ago. And before that it led for a big portion of the day.

Such a good album, I enjoy every minute, every vocal, every harmony, every solo and every f**king riff of it.

The peak of Kai Hansen's songwriting although he did 3 major songs on Keepers 2 which are naturally better than the other songs on that album.

Don't get me wrong, I'm glad Metallica won, but that was a pretty impressive showing for Helloween voters.

I like the singing, riffs and production on Metallica enough to vote for it, but Keeper Pt. 1 was a rather good album. If it wasn't so trebly, it would have easily gotten my vote.

I might vote against it now. Because the album is worse than Keeper 1. It does not deserve to get further. It is an unimportant band anyway with their cut-off-balls singer and their unmature happy silly songs. Just f**k Eurometal, f**k power metal.

And now I might vote for the mighty Metallica. I always enjoyed this excellent superproduced album. Man, this is songwriting.

Forostar said:
I might vote against it now. Because the album is worse than Keeper 1. It does not deserve to get further. It is an unimportant band anyway with their cut-off-balls singer and their unmature happy silly songs. Just f**k Eurometal, f**k power metal.

And now I might vote for the mighty Metallica. I always enjoyed this excellent superproduced album. Man, this is songwriting.
Click to expand... 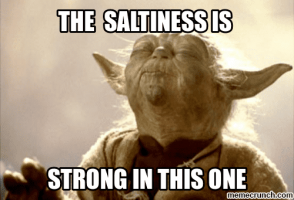 Since it’s Yoda, the top and bottom phrase should be swapped.