Let's see who's going to finish this song. Recorded in 1969, this is the longest song the Golden Earring've ever done.
In fact it's a cover from a Byrds classic.

This is psychedelic rock in optima forma. Back in the day the Earring did 45 minute versions of this, on stage.

It's suspenseful and has at times hallucinating atmosphere. The guitar parts are both acoustic and electric and quite groovy as well. The bass is prominent in the mix and I can really hear how this stuff must have influenced Steve Harris.

Take a deep breath and ride the Eight Miles High... 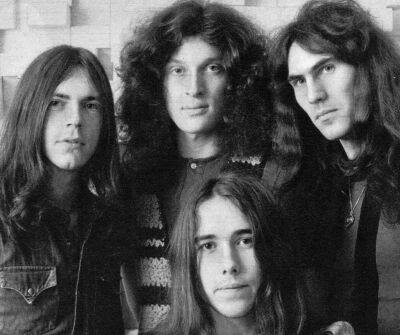 You forgot the poll again

I liked it! I thought it could have been shortened a bit to about 15 minutes, but overall pretty good! The drum solo I actually liked 7/10. Would be higher if the slow parts didn't drag for so long.

I hope some people can stand this stuff. I see it as a huge jam session, enriched by George Kooyman's guitar work, which I particularly enjoy.

Staff member
What do you rate it, Foro? I had never heard of this song, and I do listen to some Earring. 45 minutes is impressive, I don't think I've heard of any song that's gone on for 45 minutes. Even DT barely falls short. The Bass line is groovy and the first 3 minutes went by really fast, but I'm 4 minutes in and it hasn't changed much. I like the guitar parts and all, but I'm still waiting for it to go somewhere, and it hasn't.

There we go. The buildup was fantastic and it's finally changed its groove. I also keep forgetting that this is psychedelic rock, I'm expecting many changes and it to be more progressive, when it isn't.

7:30 I really like this guitar part. Best part of the song so far. And I'm really hearing some Harris like bass here. It also reminds me of the octave type bass line used in Sheep by Floyd. (At least I think it's sheep, it might be one of the other songs from that record)

Drum solo is pretty good, definitely more interesting than Moby Dick, but I don't like Drum solos much, especially when they are inserted into a song. I could do without it honestly.

11 minutes in and this drum solo went far too long. But finally it got a groove going again and it's pretty good. Liking that riff at 11:45, or I guess it's more of a bass solo.

13 minutes in, this song is starting to drag. I get what you mean by Jam sessions, but when I listen to a long song, I want something more conventional, that is less than a jam.

14:54 I like this part alright. If the part before the drum solo went in to this and all that stuff in between wasn't there it would be fine.

17 Minutes, some cool guitar here too, the groove is good.

OK so here is what I got from it, while there was some good guitar and bass work here and there, the entire song didn't really go anywhere for me. It didn't need to be 19 minutes, and I'd hate to have to sit through the song for 45 minutes. Although it was groovy, I didn't see anything real impressive musically in the guitar work, I could probably learn the whole song in a week. But I guess that's not the point in these songs. I think my problem is, when I listen to a long song, I expect something really progressive, shows much musicianship and that comes off more as a complete song than a jam session. So maybe it's my attitude that is restricting me from appreciating this song. There were parts that I enjoyed, but many of those parts didn't last long, and there was so many parts that didn't need to be there. Like the drum solo, and the weird vocal thing toward the end of the song.

I noticed that the Byrds version is 10 minutes. It's late, but tomorrow I think I'll give it a shot. This one was just too much for me. 5/10

Wow what a review, done "live".

I rate it a 9. I find some of the solo's a bit lengthy. The live versions had longer and more solo's (also guitar solo). If I'd lived in the sixties and early seventies I am sure I could enjoy a performance of this song.

Well, what can I say, not all bands play as good as Rush (or come close), this band is quite different.
And indeed, this wasn't the best song to pick perhaps. It isn't that easy to consume, I guess.

Maybe a second play would be good, seriously. I always wait for those cool guitar chops, and this special atmosphere grabs me every time.

Forostar said:
Well, what can I say, not all bands play as good as Rush (or come close), this band is quite different.
Maybe a second play would be good, seriously. I always wait for those cool guitar chops, and the suspense grabs me every time.
Click to expand...

I get that, and that's my fault for expecting something Rush like. I will listen again tomorrow, and try to go into it with a different attitude.

The song is also nice when being in a car (when you can't do anything else but watching the road).

Staff member
Then I'll have to try it next time I'm in the Nevada desert.

I will definitely listen again

Staff member
My live review of the song:

Nice riff in the beginning...don't like the vocals...too Beatles-ish...nice guitar work that reminds me of sitar (I guess, or a similar instrument)...and then it starts plodding...

Staff member
Sorry guys, took the better part of three days to work my way through this one.

It's actually quite good, if way too long, and would have benefitted from a fatter sound.
Mosh did a good job of generally capturing my impressions as well.
I'll remember to bring it next time I drive to Alberta.

Night Prowler said:
My live review of the song:

Nice riff in the beginning...don't like the vocals...too Beatles-ish...nice guitar work that reminds me of sitar (I guess, or a similar instrument)...and then it starts plodding...

No prob, I've started learning your taste by now.

Thought some of you might like to see these old rockers still going strong. E.g. @mckindog @SixesAlltheway @Cornfed Hick @JudasMyGuide

Very fresh at old age! I highly recommend the 2nd half from Vanilla Queen (gets heavy!) with Twilight Zone (awesome soloing) right after it. Incredibly good, what a great finish!
@12:30 ==> start here.