Countdown to Senjutsu. 17 albums in 17 days. 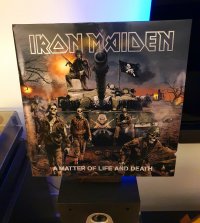 Time to go over the top

Really liked the artwork and booklet of this one. Nothing fancy. Went fine with the music.
M

eddie666 said:
The Legacy is hard to like. It starts great but it doesn't want to give you a tune, almost deliberately trying to put you off. The words are a tiresome bleat too.
Click to expand...

It's funny how people's tastes can be so different. I hate the tiresome intro so much I almost got rid of the song. But I managed to save it by chopping off the first 3mins and 10 seconds. Now the song is good.

I'm also not a big fan of greater good of god, it's chorus sounds like a Broadway musical which is off putting to me.
Highlights are longest day, out of the shadows and lord of light.

AMOLAD, one of my favorite Maiden's albums ever. It's heavy, it's dark, it's luminous, it's melodic, it's catchy, it's hypnotic, it's creative... AMOLAD is almost perfect. The tracks I love the most are the rockers "Different World", "The Pilgrim", "Out Of The Shadow" and the epics "Brighter Than A Thousand Suns", "Reincarnation Of Benjamin Breeg" and "For The Greater Good Of God". The songs I like the less are "Lord Of Light" and "The Legacy", because a little bit boring to me compared to the other tracks.

Overall it was great seeing Maiden make another concept album (albeit a very loose concept). Released in the wake of Iraq/Afghanistan it felt relevant doing a war album (frankly given recent events it's still relevant now). This is the second strongest album of the reunion era. There's not a bad song here. Amazing album.

This was the latest album from them when I started getting into Iron Maiden and wanting to discover them more. I had only heard a couple of songs from them prior. I started off with the usual classics and then went all the way back from their discography. It wasn't until almost a year later from that point on which I landed on that album.

This is a very good and balanced album. It may not be a pure concept album, but the themes are recurring and steady enough for me to not challenge anyone who would do so.

It doesn't reach the high overall points that Dance of Death did, there are some high moments on this album. The lower points of this album also manages to be higher than the middle points from Dance of Death as well.

Different World is one of my favourite openers of this current era.
The lyrics to These Colours Don't Run are excellent.
Brighter Than a Thousand Suns succeeded greatly at what I thought Montségur from the prior album failed at.
The Pilgrim has cool guitar parts, but the chorus doesn't do this song justice.
The Longest Day has the best chorus of this album. Out of all of the tracks from start to finish, this one is the greatest of this album.
Out of the Shadows is a great pallet cleanser with dreamy Dave Murray guitars all throughout.
The Reincarnation of Benjamin Breeg somehows manages to be ethereal and heavy and the same time. I never understood who/what the lyrics refer too, but it's a great track nonetheless.
The "please tell me now what ..." pre-chorus parts of For the Greater Good of God is better than many main choruses from their catalogue.
Lord of Light is a song that I listen to way less than I should. It's a great track, but it was unfortunately the song I was listening to when I learned that my last living grandparent had passed. It's a great song that doesn't hold great memories for me. It was the first time in years I had listened to it, and I got why I was stuck on this song back then.
That part after Janick Gers' last solo when it comes back on with the last couple of verses is the top moment from this album, and one of the top moments of their catalogue.

A Matter Of Life and Death
I am still pissed that I missed this tour. I would have loved to have seen the band so fired up about playing the entirety of one of their heaviest, best, and most consistent records. There is truly no filler and the whole sound is just immense (even if the mixing, raise Bruce’s fucking voice Caveman!, is sometimes flawed). FTGGOG, BTATS, Colours, Longest Day, and Lord of Light are phenomenal and perfect. I’ll even include Breeg in there on a good day. Different World is the weakest here, but it’s light years better than the duds on half of Dance of Death.

Due to the “raw” recording and mixing, Bruce’s performance is rather spotty, but when he’s on he’s on absolute fire. His tone and inflections add so much to these songs. But seriously, why do the vocals in The Legacy sound so weird? Shirley should know how to mix better than that. Once again, Nicko sounds wonderful. His drums are massive. I love this album. It’s not perfect, but it’s top three for sure. Like TXF, it’s a complete mood, except this one is actually good.

AMOLAD is definitely my 2nd or 3rd fave reunion album. It's a good mix but Steve's decision not to do a proper mastering on the album holds it back (to me). The levels just aren't right. It sounds flat. But the songs pretty much kick ass all around with really only The Legacy and Maybe Benjamin songs I generally skip. Longest Day, For the Greater..., Colurs..., Different World, Lord of Light, Brighter... ... lot of really strong songs here. Just wish Steve would let someone else besides himself and Kevin (and Rod?) opine on production values/mastering. Rick Rubin would've made this album absolutely heavy AF and more organic.

Spaldy said:
Different World isn't their best opener but it's light years ahead of Wildest Dreams
Click to expand...

This is not very difficult.

R@inmaker said:
It's a good mix but Steve's decision not to do a proper mastering on the album holds it back (to me). The levels just aren't right. It sounds flat.
Click to expand...

Keep Rick "clipping sounds great" Rubin as far away from Maiden as possible. Put him on Mars.

If something is supposedly never mastered how do you remaster it

The Final Frontier was the first Iron Maiden album I actively followed. I liked the band back then, but wasn't fully down the rabbit hole.

I remember back at release finding the album disappointing as a whole, and there was a time when I'd only really listen to The Talisman and When The Wild Wind Blows.

The album is a grower, though. It was back then and it still is. Every time I listen to it I feel like I've treated it too harshly.

As mentioned before, I loved The Talisman and The Wild Wind Blows back then and I still do. The former is a galloping good time, and the second is a Harris excess in the best possible way. My other two standouts are the title track (one of the best short songs the band ever released, though I wish the intro was separated) and Coming Home, which is just gorgeous - I would love to see it return to the setlist.

In terms of the shorter songs, The Alchemist and Mother of Mercy are both great songs. El Dorado lets the team down, as it's the worst song on the album.

The longer songs are the section that needs longer to digest. Isle of Avalon took a while, but it's now one of the stronger songs on the album. Starblind isn't (sorry) but it's always better than I remember. And speaking of remembering, I always forget just how good The Man Who Would Be King is.

Anyway, really solid album, and probably the hardest for me to rank. It's probably jumped up at least 5 places over the years, though.

Mother Of Mercy, The Alchemist, Isle Of Avalon...

Coming Home is the closest Maiden comes to Bruce´s solo sound.
Starblind was a song that had to grow on me, now it´s also one of my many many favourites.
And that intro Of The Man Who Would Be King...
The Talisman chorus!
Yes, this is my favourite of the reunion era now.
Not a single weak moment here!
I´m even thinking to put this in my Top 5!

This album is a grower. I remember that I liked it very much. After the premiere, I stopped listening to it, I don't know why. I came back to it two weeks ago and it's really strong. I still like the sound. Probably one of the few albums that I would not change in any way.

I really, really like The Final Frontier. Think its great. Cover is cool, like the production. And the songs feel special. Could have done without Alchmeist though, split Satellite and Frontier in two instead and it would have been 10 great songs.
Coming Home is amazing, beautiful. Always makes me kinda teary, haha. Isle of Avalon is amazing. What a song. Starblind is also so cool. Such a weird song with so many powerful and also beautiful parts. Talisman is one of my all time favorite Maiden songs. Love it. Its so epic. Love the building, and Bruce vocals is unreal.
Both The Man Who Would Be King and When the Wild Wind Blows have grown alot on me. Great songs. This album feels like a grower.

The Final Frontier.
I bet they got the title from that joke, “How many ears does Dr. Spock have?”
I love this one, a top 6 for me, my favorite reunion album.

Frontier chorus gets stuck in my head.
Adore El Dorado. All instruments and voice are in concert. Great three lead split, the pomp, pomp, Powerslavey backdrop to Dave's followed by Janick's thrashy trashy landscape.
Mercy's “What is it you do?” delivery by Bruce sounds like he's about to break into tears.
I thought I wouldn't enjoy Coming Home, but I did! Their best ballad?
Alchemist provides some nice off-kilter feel to counter the sweetness.
Avalon's last great line “Lost sooooulllls on the iiiiiisle of the deeaaaaaaad”.
Starblind is blindin', Talisman rocks.
King is another Dave gem which gets underrated.
Wind is one of the best epics they've ever done.

Basically, I love it all and it gets better over time. I'm sure there's stuff on here I've not even picked up on yet as it's so dense. I had a problem with the headphone sound, the mix was getting clogged up, so I changed to speakers and got instant separation.

For me this one is their weakest album after reunion. A few good moments certainly (Starblind, Talisman, WTWWB, Coming Home) but the structure of some songs seems a bit confusing , Bruce strains unnecessarily lot, the 2 singles are very weak for Maiden. It was even being sold in kiosks in Greece (never happened before or again after that). Slightly better than no prayer and virtual xi but still no more than a 7/10 for me.

Michalis said:
It was even being sold in kiosks in Greece (never happened before or again after that).
Click to expand...

From There to Eternity was sold in kiosks too. I have both.

The reason for this is the Greek government put a tax on CD's, so it was sold in kiosks with an oversized booklet in disguise as a "magazine" so it wouldn't have to have the tax paid on it. 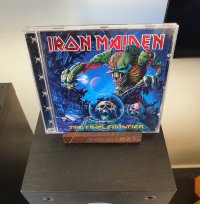