srfc said:
Crazy Blaze was gone because he never could be that persona in Maiden, if he looked at the crowd and said "hey you in the glasses" most people would be thinking "who is this cunt? He's not Bruce Dickinson". You can't come into a place acting all Billy Big Bollocks when you're a replacement unless you have something to back it up, which Bruce had with The Number of the Beast, whereas Blaze confidence must have been smashed by the press, and a lot of the fans, reaction to the X Factor.
Click to expand...

I think the ''wildman'' vocalist is more suited for a rock band. Maiden's music is more ''busy''. Neither Bruce nor Paul had such stage behavior. You need to adapt to the new band. I could be terribly wrong here, but I think Bruce in Samson had a different stage behavior than after he joined Maiden.

A little bit of crazy Blaze was there some times though...at least at the end, and the South American audience allowed it too. Above is his ultimate performance with Maiden, 12 december 1998.
Last edited: Feb 6, 2022

A little bit of crazy Blaze was there some times though...at least at the end, and the South American audience allowed it too. Above is his ultimate performance with Maiden, 12 december 1998.
Click to expand...

Ooh, thanks for sharing. Always nice to hear Blaze break out a "motherf**ker" like in the old days on a Maiden stage! And he sounds great on this. My personal fave is Madrid '98--in a perfect (or magical) world, they could go in to the soundboard recording, clean up the sound overall (especially on the first song or two), have Blaze overdub a few of his flubs, and you'd have a really strong Maiden live album, IMO.

A recent interview with Blaze about Maiden, his solo career and more:


He said that he is really proud of co-writing ''Como Estais Amigos'', ''Futureal'' and ''Look For The Truth'' - he couldn't have written these songs outside of Maiden.

About the vocalists who were his biggest inspiration, he named Bon Scott, Dio, Bruce and Eric Adams. He also said that Bruce is the most amazing vocalist in music.

CA Bryers said:
We all know how it played out. I'm still a fan of each stage of his career, but I think he just never found a comfortable role in Maiden. With Maiden onstage, there was sadly no sign of the crazy Wolfsbane Blaze. According to him in the At the End of the Day book, that was partly due to his tour-long fight with the crew's monitor guy, which kept him mostly stuck in the center of the stage so he could hear the monitors properly. This was fixed on VXI Tour with his in-ear monitors, so he moved way more and sang generally better, but the crazy Woflsbane Blaze was gone by that point...or Steve didn't want that Blaze onstage.
Click to expand...

That's a good point and very visible when you go back and watch X-Factour performances (that Blaze stays pretty much center stage for most of the show). Larger stages in general was also a problem for him I think - it's much easer to get the first few rows of people elevated at a club gig than trying to play the "wildman" at a big venue where you're not directly in front of the audience. 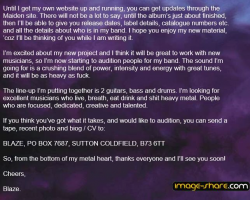 23 years ago soon! Announcement on ironmaiden.com in March of 1999.

Guess I will be playing Silicon Messiah tonight.

Yax said:
Guess I will be playing Silicon Messiah tonight.
Click to expand...

His best album! Although Tenth Dimension and Blood&Belief are very strong too.

I have been looking for a bootleg from the performance at Wacken 2000, didn't find anything though, just this text:

While ANCIENT was closing their set, a lot of people were already waiting for ex IRON MAIDEN frontman BLAZE BAYLEY to jump on stage. It was very brave to see that this man simply picked up his life and started a new band under his own name. He didn't change his stage performance too much and next to songs from his current solo album "Silicon Messiah" ("Ghost In The Machine", "Evolution", "The Brave"), he even played a few old MAIDEN songs, like "Man On The Edge" and "Futureal". The audience loved it and so did Blaze. His new album is very well received everywhere and the response from the crowd was enormously today. Probably this was one of the reasons, why a lot of people missed the German band SQUEALER…..and so did we.
Click to expand...

Staff member
I was wondering whether I think Silicon Messiah is better than Brave New World, and then I remembered that this song is on it and there's no contest.

He created something really special with that first Blaze band. If it had been managed better and been given the opportunities maybe they’d all be together now on album 12 of a sterling career

Staff member
That management he had between the post-Blood and Belief period and The Man Who Would Not Die was a fucking disaster for so many reasons. Not to mention they halted his entire career in the middle of the recording of what promised to be a brilliant follow-up to B&B which we will never get to hear. There were clips of live performances of two of the new tracks online at the time and I can only say I wish we'd gotten that album.

Staff member
Here's one of those tracks. Obviously this was a special performance, and very rough, but it would have been great.


The second one was called "Death of a Singer" I think, and was a tribute to Dimebag who had recently been murdered. I only ever heard it once and haven't been able to track it down anymore ever since.

Perun said:
I was wondering whether I think Silicon Messiah is better than Brave New World, and then I remembered that this song is on it and there's no contest.

''Stare At The Sun'' is a great song (probably Blaze's best solo song), but better than the BNW album - no way.

Btw, the album has a great production.

Perun said:
Here's one of those tracks. Obviously this was a special performance, and very rough, but it would have been great.


The second one was called "Death of a Singer" I think, and was a tribute to Dimebag who had recently been murdered. I only ever heard it once and haven't been able to track it down anymore ever since.
Click to expand...

That track sounded great. Another big ‘what if?’ In Blazes career

Blood and Belief reissue on CD and Vinyl coming soon! With a new artwork. I think it looks good. He has done a reprint of Blood and Belief on CD before though, but then it was with the original artwork, around 2013 I think.

Excellent news. An album that I grew into and enjoy so much more now I’m old and jaded

My least favourite from his first three but still a great album! Soundtrack Of My Life is the highlight! Life And Death is also one of his best songs.

Cool artwork, I like the reference to the title track with the wolf.