I wish the circumstances for opening this thread were different.

Great singer. A sad loss. Too young to die. RIP

Here is a video by Kiko, talking about Andre and Angra...

Onhell said:
Here is a video by Kiko, talking about Andre and Angra...

Very moving, and a gold mine in biographical notes, which were severely lacking from this period.

I’m a huge fan of the Matos era Angra. I discovered them back in 2000, started to use internet and Napster for the first time, and my brother wanted to show me a song by Manowar called Carry on. He downloaded the Angra song by accident, and I liked it way more than the Manowar track. I still listen to Angels cry and Holy land every now and then.

Have not heard much of the stuff from later on, but I will check it out eventually, since Fabio Lione is an awesome singer and Kiko is a very underrated guitarist.

Rest in peace Andrè, you left the world way too early. He was an amazing singer in everything he did. Wish he would have done more Angra and Symfonia albums

I liked the Matos era, but Edu is by far my favorite Angra vocalist. Temple of Shadows is a masterpiece of an album. 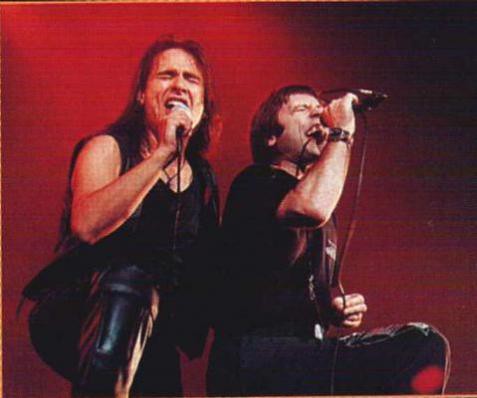 Picture taken on 16th January 1999, shortly before it became official that Bruce had rejoined Iron Maiden. Bruce did sing 2 songs live with Angra in Paris, Run to the Hills and Flight of Icarus and rumours were rife about the imminent news that were about to be announced.

Spread Your Fire by Edu Falaschi with an orchestra. I thought this was very good and can't wait to see the full show. But I haven't been able to find out when it gets released.