Hi, I'm new to the forum and the search engine did not return any results matching these keywords, so hopefully I'm not opening a repeating topic.

I've seen Maiden live in Ostrava, Czech Rep. and saw Adrian Smith playing a red Jackson doubleneck guitar on
"Children Of The Damned"
. I've seen the same guitar on some photos from the AMOLAD recording sessions. On stage, Adrian seemed to be switching between the two necks when changing between clean and dirty sounds. Does that make any sense to you? I never saw him playing a doubleneck before. Does anybody have any info on that particular guitar?

God damn!  Couldn't you spoiler that mate?  Now I know one of the songs in the setlist

.  Anyway,  I don't think you did it intentionally so you're forgiven.  Try not to do this again because we have some really grumpy bastards as mods,  and they're not as tolerant as I am

Well there is a thing called footswitch if one wants to switch from clean to dirty so that's probably not the reason. Apart from that both guitars contained different elements did one of them have twelve strings?
A

I´m pretty sure that both necks were six strings. Both parts of the guitars were also equipped with standard pickups, so there´s no way H was switching between regular and piezo-pickups. Even if he was doing that, there would be no reason for a doubleneck (see e.g. John Petrucci of Dream Theater). The only reason that would make some sense would be a different tuning on each of the neck. The problem however is, that I saw a few bootleg videos too, where Adrian played the same song with a regular guitar. So why would he switch to a different tuning now?

The only difference that I noticed was that, the lower guitar had a Floyd-Rose style tremolo, and the upper one had a Tune-O-Matic, or that kind of thing.

A guitar synth doesn´t make sense either, because Adrian also played a Strat with a MIDI pickup on the same show, so that apparently was for the guitar synth.

The most obvious reason is (I think) that he thinks it looks cool. So do I by the way.
A

Here's a youtube link to a video from Download 2007 festival, where Maiden play
Children Of The Damned. http://www.youtube.com/watch?v=N6ykD6mi1I4
You can see H playing that guitar. The upper part of it looks very weird, as if the strings were continuing beyond the bridge towards the right edge of the guitar and were ending in some kind of....whatever it is...piezo pickups?? No need to use a doubleneck for that...hmm..any ideas??

BTW...the tuning seems to be the same on both necks as H appears to be playing exactly the same stuff a Janick and Davey.

Altostratus said:
Both parts of the guitars were also equipped with standard pickups
Click to expand...

When I did a freeze-frame on the youtube vid, it was clear and obvious to me that the the two necks have distinctly different pickups. Perhaps there's something special about the pickups on the top neck (his clean tone) that he doesn't have on any other guitar, but he didn't want for his distorted tone. Thus, the only way to play two guitars in one song without switching: a double-neck.

Having said that, it doesn't mean Altostratus was wrong, as I don't know what the "standard pickups" are on Jackson double-neck guitars. But it looked like a custom job to me.
A

Yeah, the doubleneck must definitely be a custom made thing. I don't think that Jackson makes stocks of such instruments.

As for the youtube footage...yes, the upper neck seemed to have a slightly different setup, but it definitely had "regular" (i.e. coils) pickups. Either single-coils, or humbuckers, but it did have that. A piezo pickup is not a reason for a second neck. Neither is a MIDI pickup (i.e. guitar synth). We already ruled out a different tuning.

The main difference between the two necks seems to be the bridge (and what's beyond it) of the upper neck. It's not a Floyd Rose-type thing, it looks more like Tune-O-Matic. What's weird is how the strings seem to extend beyond the bridge towards the right edge of the guitar body and end in some kind of black buttons.

Altostratus said:
What's weird is how the strings seem to extend beyond the bridge towards the right edge of the guitar body and end in some kind of black buttons.
Click to expand...

I think I have the answer... The first guitar has 12 strings. Six of the twelve tuners are on the headstock, the others are on the edge, which basically explains the presence of these "black buttons" on the right edge, as you said.
Have a look at this guitar :

It's an ESP, but you can clearly see strings coming from the right edge (their tuners) into the neck.

EDIT: http://www.amirderakh.com/collection-ja ... l.php#null
Here you can see some close-ups of a custom Jackson Double Neck, and more precisely the bridge.
A

Dammit! Spitfire, you're the man. You got it. Karma to you, my friend.

EDIT: OK, well, it seems there's no karma on this forum, but thanx anyway )
A

Altostratus said:
EDIT: OK, well, it seems there's no karma on this forum, but thanx anyway )
Click to expand...

There is, but it's called "user rating", and it can only be used by members who have 50 or more posts

I kind of like this guitar setup, with six of the tuners on the side, as it keeps the headstock in its normal size.

SMX, you disappoint me. It's obvious that the upper neck is a twelve string guitar. Not only from what you see, but also from what you hear... I see that all the other n00bs wouldn't get it... but you... deeply disappointed I tell you

Staff member
Yep, I really screwed that one up. In penance, I'll stop acting like I know everything about music for five full seconds.

And now I'm ready to spew disinformation once again!

a nice pic of the jackson model : 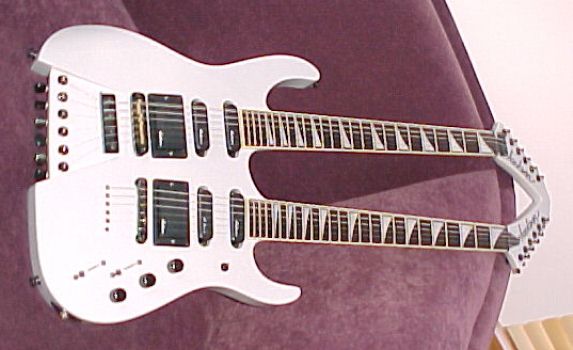