Ladies and gentlemen, welcome to the first ever ABBAvivor! You may have thought this was a forum dedicated to metal (with one band in particular taking precedence over the others), but actually it's all a cover-up for the biggest underground circle of pop fans online. Have I lost you yet? No matter. This is the year's first PopFans Survivor, with Taylor Swift slated to begin directly after this one concludes.

ABBA certainly need no introduction. During the '70s and early '80s, they were one of the biggest acts around, and are one of the few pop artists that even metalheads can enjoy. What sets these guys apart from the rest? Simple: chemistry, chemistry, chemistry. Even amidst all of the shit they were going through - breakups being just the tip of the iceberg - they really work superbly together. Some of their music goes deeper than it appears on the surface, and their later work in particular showcased some more mature musicians at work. They also had a real penchant for writing hooks, and Agnetha and Frida are two of the best female vocalists... ever.

We begin the ABBAvivor with two albums that aren't usually anyone's picks for a favorite ABBA album. The band's debut, Ring Ring, and its follow-up, Waterloo, are kind of inconsistent, but there are some gems here. This Survivor is set up just like the ALEVIVOR was: There are no promotions, all songs stay in the game until they get voted out. It's simpler and that way if people really hate everything on an album, there's no sweating over three songs still needing to be brought to the finals. The polls are left open at my discretion; it means that I can best judge once everyone's voted so as to get the best number of participants in any one round.

Apart from that, it's standard procedure. The winner takes it all... but which song will be the winner? Let's find out...

Diesel 11 said:
and Agnetha and Frida are two of the best female vocalists... ever..​
Click to expand...

I did, but have you heard Floor?

So you have time for this, but don’t have time to finish off the poor abandoned Blaze countdown...?

Jer said:
So you have time for this, but don’t have time to finish off the poor abandoned Blaze countdown...?
Click to expand...

Number 6 said:
I did, but have you heard Floor?
Click to expand...

As a part of Nightwish, yeah.

Forgot the Ring Ring bonus song "She's My Kind Of Girl", so I've tacked it on at the end of the poll. 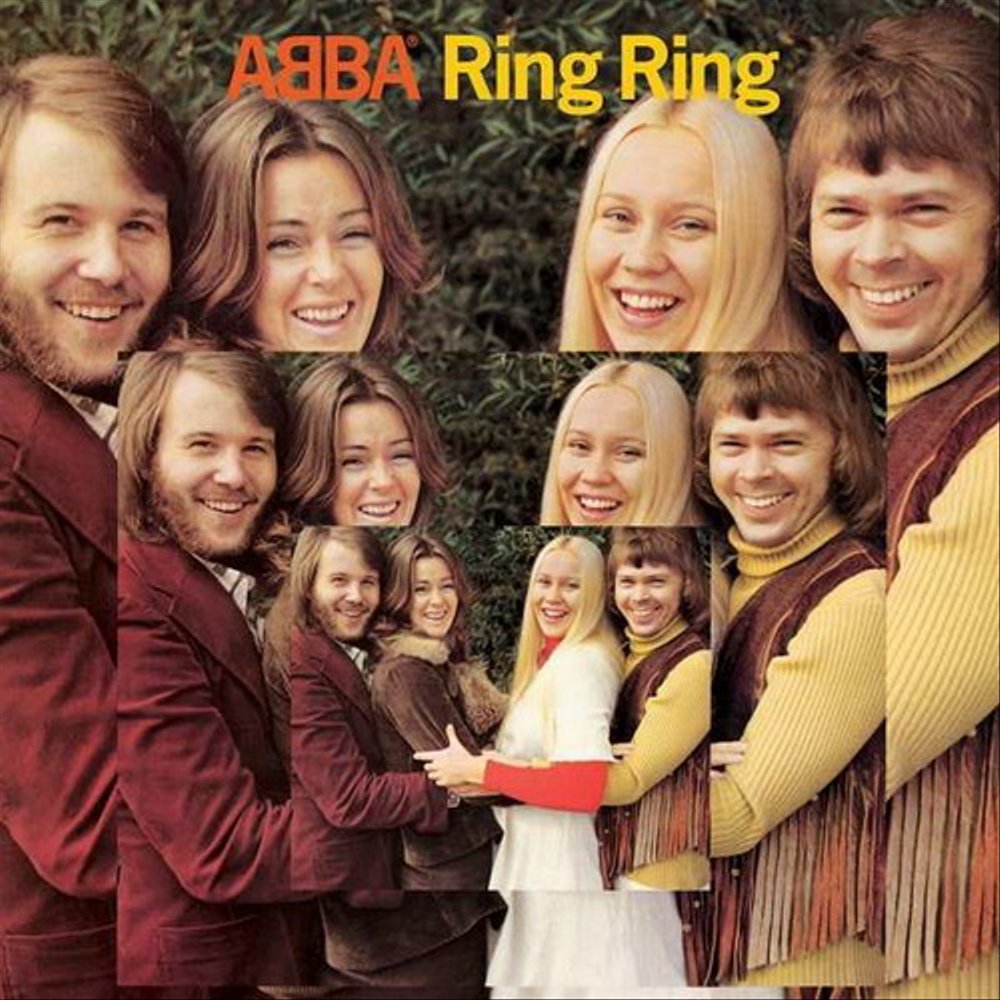 1. Ring Ring - Good way to open the album. Pretty great title track and one of my faves on here. Solid verse leads into an infectious chorus that I quite like. It's a bit short but pretty satisfying. 9/10

2. Another Town, Another Train - Bit of an underrated song. It's one of the ones where the male vocals are actually quite good - Björn and Benny don't always sing on the best songs but this is pretty good. Young ABBA doing things quite well even if it's not the most mindblowing song. 8/10

3. Disillusion - Love this song. It's got Agnetha's sole writing credit and she absolutely kills it with her performance here. I'm sad that we haven't gotten more written numbers from her in both ABBA and her solo career. This song is an emotion-tinged pop number that's just absolutely awesome and I love it. Should be more popular than it is. 10/10

4. People Need Love - After a string of pretty good songs, the album dips in quality for this... thing. Blandly stupid pop song that isn't terribly bad, per se, but it's definitely near the bottom of the barrel of their career. 4/10

5. I Saw It In The Mirror - This song isn't the most special thing, but it is a bit of a grower. Not the most typical ABBA tune, but the male vocals work quite well in making it a solid if not quite outstanding number. 7/10

6. Nina, Pretty Ballerina - Like the previous song, this one too is solid but not outstanding. Kind of a happy-go-lucky little number, which is nice. 7/10

7. Love Isn't Easy (But It Sure Is Hard Enough) - This song walks the thin line, so to speak. The verse doesn't blow me away, when the high female vocals break into it's kinda jarring (although they're good vocals), the "sweet, sweet, our love is bittersweet" thing is kinda silly, and the ending is a bit repetitive, but y'know what, that chorus is actually pretty good. I'm gonna stick with my previous two scores. 7/10

8. Me And Bobby And Bobby's Brother - I keep looking at that title and going, "Jesus Christ, couldn't have made it less bulky, huh?" Yet I really do like this song. It's a look back at childhood and remembering how good you had it then and wishing for it to return - a nostalgia trip, so to speak. They pull it off surprisingly well. 8/10

9. He Is Your Brother - This is another pretty silly song, but not as insufferable as "People Need Love". There are a couple good parts here that manage to push it just slightly above average for me. 6/10

11. I Am Just A Girl - I actually completely forgot that this song was on here. It's one of the best ones from the album, though. Gives a nice contented feeling and it's simply pretty great overall. 9/10

12. Rock'n Roll Band - Solid ending to a solid album. I've always thought the choice to shift down in key from "come on baby let's dance" to "to the rock'n roll band" was an interesting one and gives it a tinge of sadness. Good song, not one of their best but I like it. 7/10

Overall, not ABBA's best album, but definitely not their worst either. They're young and inexperienced but they already have a knack for hooks and I like it. A lot of these songs are more uplifting than the stuff they'd move towards later on, so that's pretty nice.

1. Waterloo - Waterloo is an iffy album for me as a whole, but the title track is pure, classic ABBA at its finest. So much fun, so much spark, so much life. The comparison between love life and Napoleon's demise works great, and it's no wonder this was a Eurovision winner. It's really fucking good. 10/10

2. Sitting In The Palmtree - This song is a bit silly but the way the simplistic music background fronted with Björn's vocals interwoven with the girls' is quite genius. Yeah, it is silly, but it's quite nice too. 8/10

3. King Kong Song - Wow, this song is way better than I remember. It's kinda inane, but I like the vocals and beat throughout. Brought down by lyrics but it's actually nice otherwise. 7/10

4. Hasta Mañana - Pretty nice song with great vocals. Nearly knocks it out of the park, but I think the chorus runs a tad long. Also not quite sure why they'd choose "until tomorrow" instead of something else, but that's an afterthought. 8/10

5. My Mama Said - Nice atmospheric song, although the lyrics aren't great and it feels like a prototype "Lay All Your Love On Me" overall. 7/10

6. Dance (While The Music Still Goes On) - I like this song, but they came up with a great chorus and then whittled it away by just repeating it ad nauseam. It brings down a pretty good "au revoir" track. But I still like it, just not as much as I could have with some alterations. 7/10

7. Honey, Honey - Quite a nice little song. There's no real chorus here and rather the verse takes precedence, which is nice. 8/10

8. Watch Out - ABBA attempt a rock song and pull it off better than expected. Nice drive to this one. 7/10

9. What About Livingstone? - As far as I'm concerned, this song is the pinnacle of ABBA's ridiculousness. No clue how they came up with it or why the hell it actually came off of the drawing board, but it did. It's not actually bad, the chorus has a nice melody and stuff, but it's definitely the cheesiest and most laughable thing they've ever released. 6/10

10. Gonna Sing You My Lovesong - Eh, this song isn't great. Cheesy lyrics, chorus doesn't really work as well as they intended, and it's definitely one of their worse songs overall. 4/10

A slight step down from Ring Ring, although the title track is awesome. I always thought that Waterloo was my least favorite album of theirs, and I doubt that'll change, but this was a bit better than I remembered. The last three were really the biggest reason as to why it slipped down, the rest are solid if not quite the most outstanding songs overall.

So, in an effort to trim off some of the fat here, voting for:

- People Need Love
- I Saw It In The Mirror
- Nina, Pretty Ballerina
- Love Isn't Easy (But It Sure Is Hard Enough)
- He Is Your Brother
- Rock'n Roll Band
- My Mama Said
- Watch Out
- What About Livingstone?
- Gonna Sing You My Lovesong
- Suzy-Hang-Around

I'm going to need time to properly listen and digest each album. How long are you planning to keep the poll open?

Number 6 said:
I'm going to need time to properly listen and digest each album. How long are you planning to keep the poll open?
Click to expand...

I’ll be judging it by how many people vote. Since this isn’t exactly the most popular band on MaidenFans, voting could take some time, so you’ve got ample opportunity definitely. No less than a week, certainly. Especially since it’s two albums.

Also, we still doing the Taylor survivor after this?

That’s what I figure.

Staff member
Not their greatest songwriting on Ring Ring. It sounds like very average 60s Top of the Pops and has few catchy moments. Waterloo is head and shoulders above it as they settle into and develop their classic 70s style.
Voting for: Another Town/Train, People Need Love, Nina, Love Isn't Easy, Me and Bobby etc, He Is your Brother, I Am Just A Girl, Rock n Roll Band, Sitting In The Palmtree, King Kong (ffs!), Livingstone.

Always liked the title track Ring Ring. A song that they did both in Swedish, English and German at the time.

They also did Waterloo in their mother tongue at the first when they won the Swedish version of Eurovision, then they sang in English at the international competetion after that and broke through worldwide.


Also, Björn is dressed up as a member of KISS but without the make-up