Welcome to the Sixth of June Saturday (not to mention strawberry penumbral eclipse) Black Metal event, inspired by the following two posts:


Magnus said:
Could we please have a special Black Metal event on June 6th?
Like, those of us already into it pretend we're just discovering it on the web and know nothing about it, and those who aren't pretend they never cared about any other genre: bal masqué meets Halloween, kind of.
Would love to see Jer in the role of a BM apologist.
Click to expand...

LooseCannon said:
Go ahead and run one.
Click to expand...

Starting it now because it's already 06.06. in some parts of the world where Maidenfans.com casts its shadow.
Black Metal being all about chaos and individualism, and me being off for most of Saturday due to a Serdi Touch event I cannot miss (unless weather fucks it up), I'm leaving this in the doubtlessly capable hands of yourselves.

Discuss why you love / hate / never heard of / couldn't care less about Black Metal.
Make, if you wish, a meaningless poll of who started it all - was it Venom, Bathory, Hellhammer, Black Sabbath, or the inevitable Adrian Smith.

Post your thoughts of what Black Metal is in your understanding.

Discuss the role of Thrash, early Sodom and Slayer, even supposed crust punk influence on Quorthon, or had he never heard of Venom indeed.

Pretend, if you wish, in a Saturnalian / Kronian carnival spirit, that you support exactly the opposite views to what you normally would. Or, again if you wish, ignore the whole thing.

Silliness, personal attacks, and all kind of improper behaviour are more than welcome, as long as you keep it interesting.

"Do what thou wilt shall be the whole of the Law", as that Crowley buddy used to say, except:
PLEASE refrain from posting links to any NSBM content. Firstly, it's generally shit and poor taste; secondly, I'm pretty sure it's against this forum's rules. And no, Burzum is not NSBM, despite Varg's confused and constantly shifting personal beliefs.

Also, try not to post until it's 06.06. in your timezone. I'm violating this right now only because Aussies. 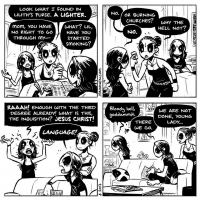 Correct, I will ban people who post Nazi songs, no hesitation, no remorse, no appeals.

The Belzebubs might actually be my favourite thing about black metal - both the comics and the hilarious music videos.

LooseCannon said:
no remorse, no appeals
Click to expand...

We don't care what it deals
Another day, another death
Another sorrow, another breath

LooseCannon said:
I will ban people who post Nazi songs, no hesitation, no remorse, no appeals.
Click to expand...

The pedant in me wonders if “Art Nazi” or “Nazi Punks Fuck Off” would qualify as Nazi songs...

This forum clearly has an anti-black-metal bias that probably correlates with the well-known Bruce/Adrian bias. Deep down everyone knows that Blaze was the best Maiden singer, and even the lamest of black metal shriekers destroys that helium-huffing tremolo freak Bruce Dickinson. Emperor Magus Caligula has more skill in one polyp from his rotting vocal cords than Bruce the Goose has in his entire body.

And what’s with these fuckers who don’t give King Diamond his due? “His voice isn’t extreme enough”, or “His lyrics aren’t Satanic enough”, or “He can’t prove he’s ever eaten a family member’s entrails”. So what? He may not be as hardcore as today’s Scandinavian savages, but without him there would be no black metal “look”.

And what about blackgaze? Hot new sensation, or genre blasphemy? I’m still on the fence.

I always wondered how Mercyful Fate is classified as black metal. Anyone care to explain?

Midnight said:
I always wondered how Mercyful Fate is classified as black metal. Anyone care to explain?
Click to expand...

Well, Ghost sings about the occult too, but nobody calls them black metal.

Venom's contribution is hard to deny, but that's still not Black Metal as we know it.
Some bands from across the Channel had something to say.

Midnight said:
Well, Ghost sings about the occult too, but nobody calls them black metal.
Click to expand...

They came after the fact, though. Mercyful Fate was there during the formative years. In retrospect, neither Mercyful Fate nor Venom are really black metal if we focus on the style of the actual music. I think Bathory is the first band that deserves the black metal moniker.

Early Sodom and Slayer had some similarities

(in fact even later Sodom has that hypnotic riffing of Black Metal, i.e. )

but it was undoubtedly Bathory that much of the later Norwegian stuff was based on.

Within a few years, Bathory went to more complicated songs, and then turned to the Viking past for inspiration.

All the ingredients were now in place.
Meanwhile, in Norway, a band initially influenced by Venom, Hellhammer and suchlike, released their debut EP in 1987:

When will you get to the church burnings Magnus? The fun stuff.

The rest, as the cliché goes, is history.
Not the history presented to you by sensationalist press, books, and a film, but the history of a truly original music genre that underwent a boost evolution in the 90s.